Its front and center time for this season’s crop of ICF 2-year-old trotters when the first round legs of the Fox Valley Flan and Kadabra stake series go to the starting gate Sunday evening at Hawthorne.

First up is the $12,000 Fox Valley Flan opening round with a jam-packed field of 11 first season fillies battling it out in the third race. With the entire field making their pari-mutuel debuts and No. 11 Frontier Jackie (Richard S Finn) starting in the second tier with 10 gals strung across in front of her, it’s anyone’s guess who will come out on top.

Some of the juvenile Fox Valley Flan gals have had brothers or sisters with past success in Illinois trotting stakes. 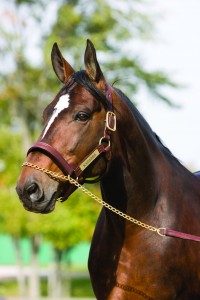 Tonight’s Kadabra stake honors the former Homer Hochstetlter illustrious trotter who had a Hall of Fame career with over $1.8 million in earnings while winning 25 of 36 lifetime starts. (USTA Photo)

Two races later a full field of 10 ICF trotting colt and geldings all make their first pari-mutuel starts in the initial round of the Kadabra stake series.

Not surprisingly the Jim Eaton’s stable Walter White was assigned the outside nine-slot by the Hawthorne Race Office. The 5-year-old gelding is having a strong year for owner Bob Silberberg who acquired the one-time Jimmy Takter trained trotter near the end of 2015.

Walter White has no easy task tonight leaving from the nine-slot with a nice field of trotters inside of him. The first four slots will be manned by Nashville Holiday (Mike Oosting), Rever Ever (Don Harmon), Big Expense (Kyle Husted) and I Could Care Less (Keith Crawford), gunning for his fourth in a row at Hawthorne.

Sounds Greek To Me: Tripoli Stable’s Mykonos ($7.80), nicely handled by Casey Leonard, shot up the inside to nail down a victory in his debut with a neck decision in the first $12,000 division of the Incredible Finale stake series for ICF 2-year-old pacing colts and geldings.

Shooting Straight was backed down and took the field to a 1:01 first half, bunching up the nine-horse field and when Not Be Gram powered out of third in the turn Mykonos and Leonard suddenly lacked racing room as they came down the lane. 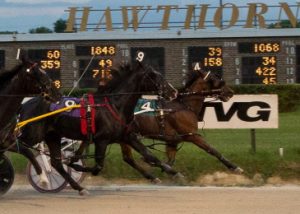 It was Mykonos (No. 4) over Shooting Straight (No. 9) and Not Me Gram (No. 1) in Saturday’s first Incredible Finale ICF freshman colt division. (Four Footed Photo).

Casey found it when he took the Tom Simmons trained freshman to the inside lane, squeezed through a narrow opening, and the homebred son of Corner Blitz did the rest, going on for 1:59 victory for his Norridge, Illinois owner.

Not Me Gram was third, beaten a half-length while the 4-5 favorite Beach Shootingstar another Simmons trained freshman, made up six-plus lengths in the lane to be fourth, less than two lengths off the winner.

Casey was back in the winner’s circle after the second Incredible Finale division was over, this time with John Barnard’s Heza Real Shooter $13.00).

Despite a tough trip Heza Real Shooter worn down the pacesetting 3-5 favorite Molina (Kyle Husted) in the stretch and posted a half-length victory with a 1:59.2 mile raced on a “good” racing surface.

OK Heavenly ($2.80) stayed perfect in the meet’s filly and mare Open Pace by taking the $15,000 co-feature in 1:52.3 with Leonard again at her lines. The Angie Coleman trainee is 4-for-4 at Hawthorne this year.

Hipnumberone (Mike Oosting) had a big effort to be second best, three-quarters of a length behind the 5-year-old mare owned by Illinoisans Dandy Farms and Mark Winship.