Homepage
You are here: Home1 / Mike Paradise2 / ICF Sophomore on Road to NOC

The desire to secure a starting berth in an ICF three-year-old pacing stake series finals on Hawthorne’s Night of Champions begins with a strong showing tonight.

The first legs of the Robert F. Carey Memorial for “the boys” and the Plum Peachy for “the gals” are the main course being offered on Hawthorne’s Saturday menu of a dozen races.

A victory in either stake is worth 50 series points. Then it’s 25 for second, 12 for third, 8 for fourth and five for fifth. A single point is earned by starting. After four legs the 10 horses with the most series points will square off on September 19th on Hawthorne’s annual Night of Champions.

Only eight state-bred sophomore pacing fillies paid their way into the third race Plum Peachy first round of competition. The two pre-stake favorites, Sleazy Gal and Fox Valley Exploit, drew the one and two posts respectively. 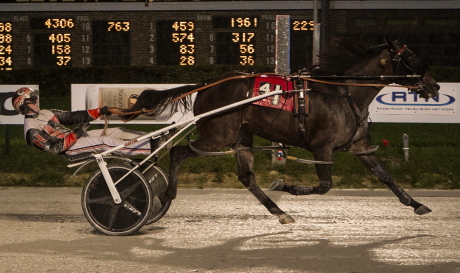 The 2019 Illinois Harness Two-Year-Old Filly of the Year Fox Valley Exploit (Kyle Husted) makes his initial start as a sophomore in tonight’s opening round of the Plum Peach stake series. (Four Footed Fotos)

Trainer Erv Miller has veteran driver Mike Oosting lined-up behind Sleazy Gal, a winner of almost $50,000 as a two-year-old with a Violet championship on her résumé. Erv had the Engel stable filly qualify twice in Florida, two weeks later at Hoosier Park and a week ago at Hawthorne (1:56 flat) with Oosting, so the Sagebrush filly looks ready to go.

Fox Valley Exploit, last year’s Night of Champion victor and the 2019 Illinois Harness Two-Year-Old Filly Pacer of the Year appears ready to roll as well. Her lone qualifier was a good one. She posted a 1:54.4 first place finish with trainer and part-owner Kyle Husted.

Meanwhile the $12,500 opening round of the Carey added money event came up large enough to have a trailer when 11 second season state-bred colts and geldings entered.

You can expect the vast majority of the mutuel handle on the fifth race stake to be wagered on two talented youngsters—the 2019 Incredible Finale champion He’zzz A Wise Sky and the ICF freshman colt pacer of the year Fox Valley Ren.

The draw for tonight certainly went Fox Valley Ren’s way when he landed the two-post for driver Kyle Wilfong. The Nelson Willis trained Sportsmaster gelding had an impressive first season with seven wins and two second in 10 starts for Illinois owners Megan Rogers Racing Stables and a bankroll of over $80,000 for his Illinois owners.

A serious bout with EPM kept He’zzz a Wise Sky (Bobby Smolin) from making his debut until late last July but in mid-August the Don Filomeno home-bred began a five-race winning streak that ended, at least for last season, with an easy triumph in the $102,000 Incredible Finale Final and the Yankee Skyscraper gelding did it from the 10-hole. It’s the same outside post the youngster will have to overcome tonight.

He’s a Wise Sky made an auspicious start for his sophomore bow last week. The colt had to race in an Open III against older and more seasoned horses, however it didn’t matter since He’s A Wise Sky paced a quick 27 flat last quarter and won again, this time in 1:53.1. In eight career starts he has over $83,000 on his card for Triple ZZZ Stable of Justice, Illinois. 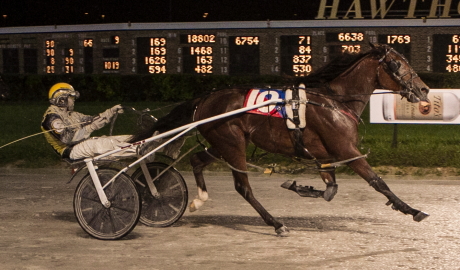 He’zzz A Wise Sky (Bobby Smolin) has his sights set on his seventh victory in a row in tonight’s first leg of the Robert Carey Memorial stake series for ICF three-year-old colts and geldings. (Four Footed Fotos)

If the Plum Peachy and Robert Carey stakes series can be described as the main course, maybe four Late Closer second round events could be called the tasty entrees on the 12-race card. They’ll go as races two (the Dave Magee), races seven and eleven (the Bob Larry’s) and race ten (the Walter Paisley).

Tonight’s appealing dessert has to be the eighth race Open Trot Handicap, and it’s another 10-horse field with a number of nice horses.

The other outside trotter in the handicapped draw is Pine Dream (pp 8, Brandon Bates), a front-stepping victor last week for owner and trainer Merv Chupp.

Note that Casey Leonard chose to drive the stable’s Call For Justice (pp 7) instead of Lindy’s Big Bang.