The old proverb “If at first you don’t succeed try, try again” can be traced back 180 years and it certainly wasn’t intended for a horse racing meeting however it does fit when it comes to the handling of this weekend’s Du Quoin meet that turned out to be a no-go because of the weather.

The powers to be, in this case, the Illinois Racing Board, the Illinois Department of Agriculture, Hawthorne Race Course and the IHHA, put their heads together yesterday and came up with satisfying solution to rescue this year’s Du Quoin racing meet by moving it to Friday night (August 30) at Hawthorne. 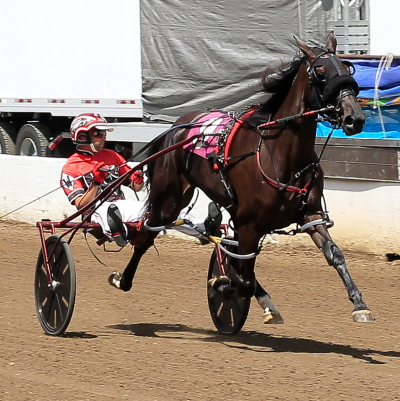 Springfield champ Sleazy Gal (Kyle Wilfong) has her sights set on the $27, 250 Director’s Award but she’ll have to wait until Friday night at Hawthorne to win the freshman filly pacing stake. (Four Footed Fotos)

Rain or shine the 25 races scheduled last Friday and Saturday at Du Quoin will be contested at Hawthorne, an all-weather racetrack. The initial nine races are non-wagering events, so they’ll be rattled off like qualifiers. At 6:30 the first of 16 wagering events will go postward including all eight ICF two and three-year-old championships.

We’ll have the line-up of the races when they become available and the first post time for the non-wagering races.

The Du Quoin races for this Friday will not be redrawn.

Only two Du Quoin races landed 10-horse fields, the Illinois Topline trotting stake for three year-olds and up and the Darn Safe for ICF two-year-old pacing fillies. Since Hawthorne has 10 horses across the starting gate while Du Quoin has just nine in the first tier, players will have to make adjustments to their earlier handicapping if they do indeed go with 10-across on Friday night.

We’ll also pass on that information when it becomes obtainable.

With the Du Quoin meet shifted to Hawthorne on Friday, race track management has agreed to add additional races to its upcoming Saturday and Sunday cards, therefore all three weekend cards will have an early 6:30 pm first post.

Back to Business: Meanwhile we do have harness racing Sunday night at Hawthorne. It’s a 12-race program without its usual $12,000 Open Trot. That event had to be scrapped when, as expected, it didn’t fill. Illinois trotting queen Anna’s Lucky Star entered Du Quoin’s ICF championship for fillies and mares, four-year-olds and upward where she’s a shoo-in to take the winner’s share of a $7,000 purse.

One of the more interesting races on Sunday night is the fifth, a $9,200 conditioned pace for fillies and mares that are non-winners of four races lifetime, or $40,000 in career earnings.

The five-year-old ICF mare Susan Sage (Ridge Warren) will carry a four-race winning streak into the event for Cathy Finn-Knitz who acquired the now Dale Kanitz trainee on June 14 when the horse had one win at the summer meet. The mare now has seven.

Unraced as a two-year-old Susan Sage made less than $11,000 in her three and four-year-old seasons. The Sagebrush mare has already banked $23,967 this year at Hawthorne, all since the mare changed ownership.

In the same race is Fox Valley Sierra (Casey Leonard) acquired by Illinoisans Everynight LLC of Chicago, Peter Kouchis of Palos Hills and trainer Terry Leonard of Harvard on June 21st and has since gone on to win four races, with one second and one third in six starts for her new connections.