After his 20 race winning streak was snapped a week ago in the meet’s first Open Pace, Illinois champion Fox Valley Gemini came back with a vengeance to capture last night’s $12,000 Open in come-from-behind fashion.

Capably handled by his regular driver Casey Leonard, the now 4-yeae-old ICF pacer came from sixth and last to roar past and win in 1:51.1. 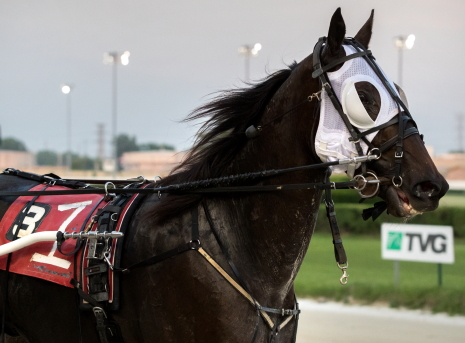 Feelnlikearockstar (Travis Seekam) also finished well to be second, beaten a half-length. Royale Rose (Tim Curtin) was third. Last weekend’s Open winner Skyway Boomer made a break racing in fourth soon after the 55.3 half and eliminated himself

Hot Rod Dylan (Juan Franco) needed a 27.2 first quarter to take command over the early leader Rockin Eddie (Tyler Shehan). Leonard took the two-time Illinois Harness Horse of the Year Fox Valley Gemini (pp 6) back at the start and was content to have the Terry Leonard stable’s star pacer race from last.

When Skyway Boomer went off stride, Fox Valley Gemini was about eight lengths behind the pacesetting Hot Rod Dylan. Leonard then got “Gemini” on the move

Fox Valley Gemini ($3.60) still trailed the field at the eighth pole however once Casey swung him to an outside lane the 4-5 public’s choice found another gear and paced a swift 26.2 last panel to nail down victory No. 21 in 24 career starts for Atwalter, Illinois owner Jim Ballinger.

Round One Done: Opening legs of three Late Closer Series got under way Friday night. The two $9,000 divisions of the Busse trot went to Lourhianon (Tim Curtin) and Trouble For All (Larry Lee Smith).

Kennedy Lindsey trained Lourhianon ($5.20) notched his second victory of the meet, this one by almost five lengths in 1:59 flat. Trouble For All ($7.40) came up the inside lane to edge Banner Blue (Ridge Warren) in the second Busse split with a 2:01.1 clocking for driver and trainer Larry Lee Smith. 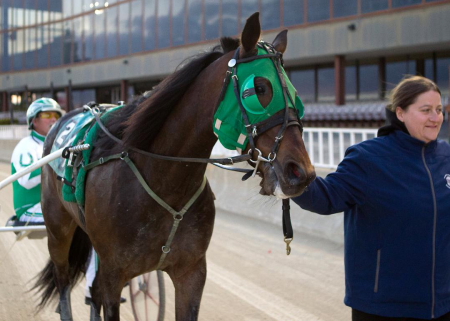 Lourhianon and driver Tim Curtin on their way to the Hawthorne winner’s circle after breezing in the first leg of last night’s Daryl Busse trot series. (Four Footed Fotos)

Fox Valley Minka ($2.40) coasted to a three-length triumph for Casey Leonard in the first leg of the Dave Magee series in 1:57 while Lilly Von Stupp ($5.40) paced a game winning journey with Travis Seekman to take round one of the Walter Paisley Serie, knocking two full seconds off her first season mark with a 1:54.4 mile.

Larry Series Begins: The initial legs of the Bob Larry Late Closer Series are the attention grabbers on Saturday’s Hawthorne 11-race program and the likely favorites in each are coming off comfortable wins with driver Casey Leonard in their respective $9,500 divisions.

The Bob Larry is for pacing colts and geldings with $30,000 (ICF $40,000) in lifetime earnings though the end of March
.
The Mike Brink Stable’s Hart To Heart figures to be a heavy favorite in the third race first Bob Larry split after a dominating 6 and 1/2 length romp (1:55.1) a week ago with Casey for owners and breeders Donna Crebs (Cantrall, IL and Judy Conzo (Lincoln, IL).

The home-bred Yankee Skyscraper gelding captured the Governor’s Cup at the Du Quoin State Fair as a 2-year-old to go along with a pair of second place finishes in legs of Hawthorne’s Incredible Finale stake. However health issues limited Hart To Heart to just three starts as a 3-year-old.

Casey will be back behind the 4-year-old Sagebrush gelding Salvatore, a determined winner in his first outing for the Terry Leonard Stable. Owned by Joseph Mc Caffrey of Bettendorf, Iowa, Salvatore raced first over when he pulled away to a 1:57.2 victory last week.

Cooter Luke, another Mike Brink trainee, paced a 27 flat last quarter in his first pari-mutuel start as a 3-year-old and it came from the 10-hole.

Will “The Boomer” Thunder Past Again? This Captain Gets No Respect
Scroll to top