Illinois’ long reining trotting queen Annas Lucky Star will be back to compete as a seven-year-old during the current Hawthorne meeting.

“Over the winter I was thinking about retiring her as a racehorse and starting her new career as a broodmare but I’ve decided to give her one more year of racing,” said her owner and breeder Danny Graham.

“I also changed my mind about her last year and let her race and she gave me another very good season against the top-level trotters here in Illinois and in Indiana and Ohio.” 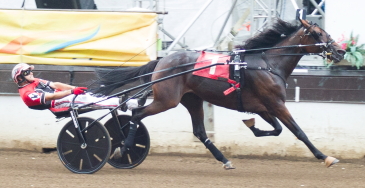 The daughter of Cassis, out of Danny’s highly productive broodmare Queen Jamie, was a six-time winner in 2020, banking over $63,000. Her current purse earnings stand at $429,682, with an impressive 40 lifetime wins and a mark of 153.1, taken as a four-year-old at Springfield.

While “Anna’s” 47 per cent winning clip certainly is impressive, the talented mare’s performance racing in Illinois is “off the charts.” In her home state she has gone to the post on 55 occasions and followed with 39 stops at a winner’s circle, an astonishing 67 per cent success rate.

“Anna” raced at the Miam1 Valley meeting Ohio earlier this year and earned $6,800 in some rugged $20,000-plus Opens with a second and fourth place finish. The mare then went unplaced in her next two races.

“She got sick,” revealed Danny, “so I stopped with her and brought her back home (Salem Illinois) to get well and rested up. I sent her to Nelson (trainer, Willis) late last month. He’ll have her ready to race at Hawthorne around the beginning of June.”

Solid Open Trot on Tap: The first Open Trot will be the center of attention for Sunday’s program. It’s an interesting field, handicapped by groups with the likely three favorites Never Say Uncle (Kyle Wilfong), Pine Dream (Todd Warren) and the Australian import Needabacardi A (Casey Leonard) ending up with the 4, 5 and 6 slots, in that order. 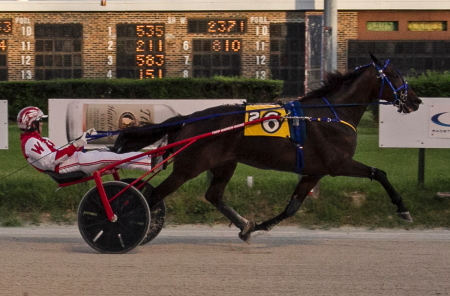 Pine Dream (Todd Warren), an Open winner at Hawthorne last summer, is back for tonight’s $12,000 Open in search of career victory No. 45.

Never Say Uncle, winner of 2 of his last 3 starts at Hoosier for trainer Brittany Dillion will open as the 9-5 favorite.  Pine Dream (Todd Warren) from the Merv Chupp stable is listed next at 2-1 after back-to-back wins in Indiana.

Pine Dream, who does his best racing on or close to the front, isn’t a stranger to Hawthorne, having won Opens on the local scene for the past couple of years. A win tonight would be the nine-year-old’s 45th of his career.

Silverhill Volo, owned, trained and driven by Jim Lackey, comes here after a successful meeting at Cal-Expo and the now 10-year-old also has had past success at Hawthorne.

The question mark is Needbacardi A., a new addition to the strong Terry Leonard stable. He made over $100,000 campaigning in Australia, and he did qualify well after being on the sidelines the last three-plus months. The chestnut gelding has been racing at longer distances and I’m thinking he’ll like tonight’s shorter mile event.

How Sweet It Is: Showing plenty of guts and determination, the three-time ICF Horse of the Year Fox Valley Gemini came roaring down the stretch to overtake the 3-5 favorite He’zzz A Wise Sky and win last night’s $12,000 Open Pace by a half-length.

Listed at laughable 12-1 odds in the morning line, Fox Valley Gemini was sent out at 3-2 from the six slot and was dropped into third in the early going by driver Casey Leonard as (No. 7) He’zzz A Wise Sky (Kyle Wilfong) took the seven-horse field to fractions of 27.2, :55.4 and 1:24 flat with Brysen (Dale Knox) in the two-hole.

Casey swung the Terry Leonard trained winner out at the top of the lane and Fox Valley Gemini ($5.00) came roaring home with a quick 26 flat last panel at the end of a 1:50.4 mile in his 2021 season debt for Atwater, IL owner Jim Ballinger.