It seems that Annas Lucky Star has been the Queen of Illinois harness racing forever. Actually, the star of the Nelson Willis season has reigned for six racing seasons going into this year.

A job change from a race horse to a broodmare awaits the talented ICF trotter but each racing season another highly successful campaign pushes back motherhood for at least one more year.

“I plan on retiring her at the end of this year’s racing season,” said her Salem, Illinois owner Danny Graham. “However, I said the same thing two years ago and she made me change my mind both times. 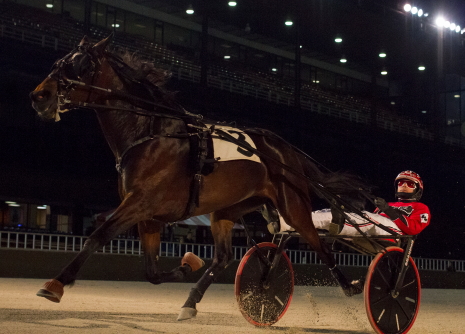 Annas Lucky Star and her regular driver Kyle Wilfong are shown here gaining one of her 50 lifetime victories. This one came at Hawthorne. (Four Footed Fotos)

“She made over $92,000 last year and she’s racing good again this year. Better than her record might indicate. She got parked the mile in one start and then got locked-in another time. She had some bad racing luck going onto last week’s race where she was able to get away with an easy first half.”

So, her retirement at the age of eight isn’t etched in stone?

“No,” answered Graham. “Let’s just see how the season plays out. She’s a happy and healthy horse. She’s never had any major vet work. Nelson (trainer Willis) says her blood work keeps coming back good and she likes to race.”

Annas Lucky Star, a Cassius offspring out of the successful dam Queen Jamie, was a confident winner in last week’s Carl Becker Memorial prep, drawing off by five lengths in a 1:55.3 clocking. With the same for trotters awaiting her tonight, she figures to get hammered down at the betting windows in tonight’s summer championship.

Her victory a week ago was No. 50 of her illustrious career, no small achievement when you consider most of her starts have come in Opens, high conditioned events, and ICF stakes. A win tonight would boost her lifetime earnings to $554,601.

Annas Lucky Star will be sitting pretty with the two-slot in another five-horse field. Lous Abigail (Juan Franco) starts to her right. To her left are Louzotic (Casey Leonard), Loulita (Wyatt Avenatti) and Reign And Shine (Jamaica Patton).

“Exploit” Back Inside: The $50,000 Becker trot championship shares the Hawthorne spotlight tonight with the $50,000 Tony Maurello Memorial for older ICF pacing mares. Favoritism no doubt will go to last week’s prep winner Fox Valley Exploit. The five-year-old Sportsmaster mare is closing in on 30 lifetime victories for driver Kyle Husted, who shares ownership with David Brigham of Concord, Michigan.

While Annas Lucky Star breezed, the heavy favorite Fox Valley Exploit was all out to hold off runner-up Rollin Cal and the third-place finisher Scorecard Dandy.

We should see Fox Valley Exploit the post time favorite again with the pole position but not by a wide margin like she was last week.

The Plum Peachy prep, race five, is headed by Violet champion Apple Valley (post three with Jordon Ross), who dominated her division by more than nine lengths. The other Violet division champ, Pattycake Mooss, (Casey Leonard) has her work cut out tonight with the eight-post in a 10-horse field.

The Beulah Dygert trot is an elimination, and it won’t take much to make the final. With a crowded field of 12 a tenth-place finish or higher earns you start in the championship.

In the second tier are Lous Xanadu (Casey Leonard) and Armbro Lark (Jordan Ross), with posts 11 and 12, respectively.

He’zzz A Wise Sky (Kyle Wilfong) sped to a 1:49.4 clocking in the Robert S. Molero Memorial Final, three lengths better than Fox Valley Gemini (Casey Leonard) while Talk About Valor (Travis Seekman) held off Louscardamonb (Kyle Husted) by a half-length in 1:54.2 in the Plesac trot showdown.

It’s A Certainty: Catch He’zzz A Wise Sky Wilfong Shines with the Ladies
Scroll to top