Homepage
You are here: Home1 / Mike Paradise2 / Incredible Tillie Showdown Could be a Dazzler

By Mike Paradise
No less than eleven ICF championships will be decided Saturday night and Hawthorne plays host to its first Night of Champions in nine years. One of the most intriguing is the $100,000 Incredible Tillie for two-year-old pacing fillies.
The likely favorites My Kind of Dance (Casey Leonard) and Razzleme Dazzleme (Kyle Husted) each boast a trio of series leg victories and come into the race sharp and confident.
My Kind Of Dance carries a five-race winning streak into the championship for her owner and breeder Adrian Adam of Beecher, Illinois, The Alex Adam trained filly skipped both Springfield and u Quoin so she has only went postward twice in the last six weeks when she held on in last week’s fourth stake series leg. 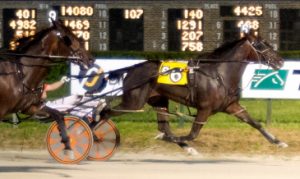 Razzleme Dazzleme raced at Springfield and performed well, winning her State Fair stake elimination before finishing second to her Nick Prather trained stablemate Artesmia who didn’t make the Tillie final despite winning the third “Tillie” division a week ago.
Razzleme Dazzleme had been first or second in 7 of her 8 career starts and was a close third the other time for her Lewistown, Illinois owners Derek and Amy Jacobus.
My Kind Of Dance and Razzleme Dazzleme path’s crossed only one thus far in their first season of racing and that was when the latter won her first leg the Tillie series back on June 24. It was Razzleme Dazzleme’s second career start.
The race was also the very first for My Kind Of Dance and Casey Leonard drove the green filly accordingly
My Kind Of Dance got away slowly that night and was eighth and last at the first quarter some eight lengths behind Razzleme Dazzleme who was in fourth. At the three-quarters Razzleme Dazzleme was head and head for the lead while the Adam owned filly remained in eighth, still some eight lengths behind the leader. She ended up third, beaten two lengths, after uncorking a 26.4 last quarter in her debut.
Both fillies do their best racing “off a helmet” but when you’re going for the winner’s share of a $100,000 pot what a driver wants in a race may not be what he gets and he’ll have react to the situation if and when it presents itself.

Last week My Kind Of Dance was all-out to hold off Hope Hotspur by just a nose and did so with a rather slow 29.4 last quarter.
I asked Casey to give us his thoughts about that race and some insight on the Skydancer Hanover filly out of the Sportsmaster dam Twenty-One Below.
“The first few starts we were tickled with the way My Kind of Dance closed,” said Casey.” The filly is a natural closer. Then in one of her summer starts I had a hard time following cover with her because she got pretty aggressive. The same thing happened in her last race. We kind of were in a precarious spot behind a filly that wasn’t a good actor either and she could hardly keep up and was taking up a lot of ground.
“So I moved by filly and once she got in the air she was fine. I didn’t want to be first up for a long way so I rushed her and luckily got to the front before the turn and while that was o.k. I used her pretty hard already twice.
“It’s asking a lot from a 2-year-old filly who is not a front-runner to then go on to hold on but she did. Her connections have done a great job of managing the filly and she’s fresh. As far as the final, I‘m optimistic”
The $100,000 Incredible Tillie Championship will go as race four on Saturday’s Night of Champions with the field of 10 fillies lining up thusly: Jump Right (Todd Warren), Hope Hotspur (Mike Oosting), Princess Sage (Freddie Patton Jr.), Razzleme Dazzleme (Kyle Husted), A Real Doozie (Ridge Warren), Sheadealer (Kyle Wilfong), My Kind of Dance (Casey Leonard), Just Doit Queeny (Bobby Smolin), Fox Valley Charliz (Pat Curtain) and Fox Valley Dandy (Matt Krueger).
http://harnessillinois.com/wp-content/uploads/2021/03/ihha_logo_white_wtext_v2-300x130.png 0 0 Mike Paradise http://harnessillinois.com/wp-content/uploads/2021/03/ihha_logo_white_wtext_v2-300x130.png Mike Paradise2016-09-09 12:43:072016-09-09 12:43:07Incredible Tillie Showdown Could be a Dazzler