Homepage
You are here: Home1 / Mike Paradise2 / It Was Much Different in Last Decade

It was a much different harness racing schedule in Illinois and while Hawthorne hosted its Night of Champions their showcase event came a lot earlier in the season and its live racing schedule was only about a third as long as this year’s.

Both Balmoral and Maywood also had split harness racing meets. Each started at the beginning of the year and went through mid-June and then started up again in early August through the end of the year. In between Hawthorne conducted a 6 and 1/2 week meet (39 days) with a Tuesday through Sunday format.

The three Chicago circuit tracks raced a total of 316 nights in 2007 compared to just a 71-night Hawthorne meet in 2019. 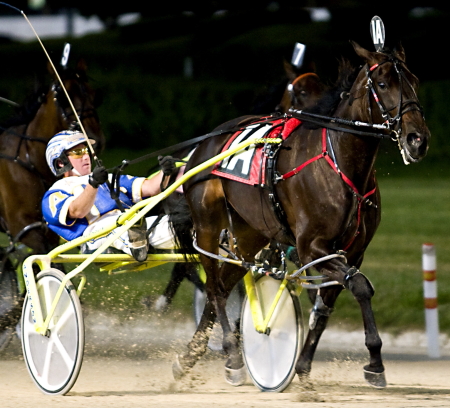 Hawthorne did make the most of its race dates in 2007 with an ambitious stakes schedule put together by its Racing Secretary Billy Perkins. Unlike now days, the $82,000 Erwin F. Dygert was an open trot stake. In 2007 it was raced on July 21 and won by the Joe Anderson Stable’s Two Weeks Notice and driven by Dave Magee.

On its first Saturday program Hawthorne hosted a pair of $60,000-plus 3-year-old Open stakes, the $61,000 Lady Chicago for filly pacers and the $68,000 Chicago for pacing colts and geldings.

Cabana Fever, trained by Joe Seekman and driven by Dave Magee took the Miss Chicago by a neck of the Homer Hochstetler Stable’s Sportsfancy while the Ken Rucker trained entry of Johnny Charisma (Mike Oosting (and Exterminator (Todd Warren0 were the one-two finishers in the Chicago stake.

The then 4-year-old ICF pacer Thisbigdogwilfight (Dave Magee) won the fifth renewal of the Carey in 1:49.3 for Illinois based trainer Jim Eaton. Tim Tetrick drove that afternoon in the Hambletonian at The Meadowlands and came back to Illinois that night to drive Cheyenne Hollywood, the Carey’s fourth place finisher.
In those days, the ICF Night of Champion events were named after the previous year’s winning stakes horses in the corresponding divisions. Those champions were:

The $61,500 (Master Shawn) 3-year-old colt and gelding pace saw Sam Widger back in the winner’s circle, this time with B 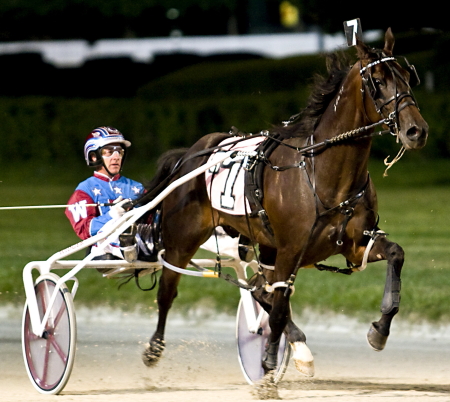 The $59,000 (Determination Plus) was for 3-year-old filly pacers and there was no surprise there as Sportsfancy swept the series with Ryan Anderson for trainer Homer Hochstetler. Two months later Sportsfancy captured the $174,000 Grandma Ann Final on Balmoral’s 2007 Super Night.

The $78,500 (Broadway Tax) freshman filly pace gave Dave Magee is fifth NOC winning horse when She’s So Hot won her fourth straight at Hawthorne for trainer Rick Schrock despite being parked-out the 56.4 first half.

The $71,500 (Fox Valley Dynamic) for 2-year-old male pacers was the final race of the night and Omaha Survivor, catch driven by Tom Tetrick for trainer Tom Harmer, won by three-quarters of a length over King Of Kings with Mucho Sleazy third in the 1:52.1 mile.

Hawthorne also had a trio of Late Closer Series that summer. The Australian bred Prime Xample A (Dave Magee), from the barn of Kim Roth, completed a sweep of the Sox series for fillies Kim Roth in the $33,600 Final while the 9-1 Kim Rinker trainer Skippers Tom Dog (Mark Saporito) eked out a win in the $35,500 Cubs series for colts and geldings.

In the $25,000 Dunkster trot the pre-series favorite Before He Cheats, winner of 7 of his first 8 previous starts, came up lame and didn’t make the final as Just A Con Man, driven and trainer by Dan Shetler, romped in 1:56.1.

The then 36-year-old Brent Holland was Hawthorne’s 2007 leading driver, his first title at a Chicago Circuit racetrack.

ICF Star at The Big M: Illinois 2-year-old colt champion Meyer On Ice goes postward tonight (Friday) in a leg of the Kindergarten Classic at the Meadowlands for the Engle Stable of Buffalo Grove, Illinois.

The Erv Miller trained freshman drew the second tier 11-slot in the ninth race and will be driven by Andy Miller. Meyer On Fire starts behind stablemate Century Ferrari (pp 1, Marcus Miller) and is listed as the 9-2 third betting choice.