Homepage
You are here: Home1 / Mike Paradise2 / It’s a Special Time of the Year 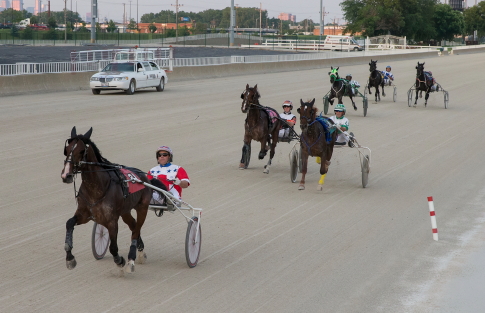 Here’s a photo compliments of Four Footed Fotos with 2-year-old pacers in action last season at Hawthorne. That’s Fox Valley Picaso showing his heels to a field of other youngsters in the lane.

Summer may not start officially until next Friday (June 21) but on the other hand in this industry most of us agree it’s already here when the first crop of 2-year-olds go to the starting gate.

This weekend are the opening rounds of the four added money ICF stakes that will eventually determine what juveniles will go on to compete on Hawthorne’s Night of Champions in mid-September.

Those trainers and their owners’ expectations are obviously high at this time of the year, as they should be. Some of them will stay that way throughout the summer series. As we know all too well, others will face disappointments.

That’s the reality of our sport. It’s full of ups and downs. But for now there are no valleys, just peaks that every owner of a 2-year-old racehorse has aspirations to reach.

First up is Friday’s first leg of the Incredible Finale stake series for ICF freshmen pacing colts and geldings. There were ample entries to split the stake into two $17,500 divisions.

Expect the Ronnie Roberts trained youngster RJ Wulfy to be a prohibitive favorite at post time after his sparkling 1:55.3 win when he debuted last week against older horses. We’ll have more on RJ Wulfy in Saturday’s column.

Saturday the 2-year-old gals on the pace get their chance to show what they’ve learned all those mornings spent on a training track. The Incredible Tillie also was divided into a pair of ICF filly contests each worth $17,500.

On Sunday the ICF juvenile trotters step forward for the first time in a pari-mutuel race. The $17,500 Fox Valley Flan first legs for fillies are the second and fourth races while the $17,500 Kadabra’s opening round contests for colts and geldings will go as the third and fifth on the 11-race program.