It’s “D-Day” for Illinois horsemen. That “D” is for decision time by the Illinois Racing Board for allocation of both the Standardbred and thoroughbred racing dates for 2023.

Unlike some of the past years when rival in-state racetracks provided some rambunctious, and at times entertaining Race Date Hearings arguing over who gets what, today’s allocations are a slam dunk.

With Arlington Park having pulled out of the Illinois thoroughbred industry and Balmoral Park, Maywood Park and Sportsman’s Park distant memories, Hawthorne Racecourse stands alone in the once thriving state’s horse racing industry.

So, what Hawthorne wants, Hawthorne gets, and the in-town racing facility wants its current thoroughbred meeting to continue through the start of the new year and all the way into mid or late August of 2023. 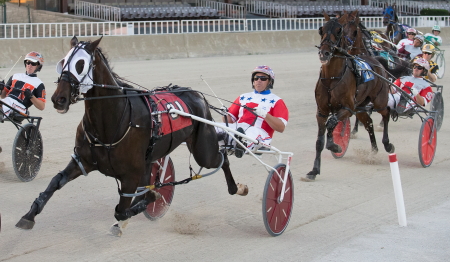 The racetrack doesn’t want what it says is a six-figure expenditure to switch from a surface for runners to another surface for Standardbreds so soon. It’s thoroughbred meeting begins tomorrow (Friday) afternoon.  The track also just put up a length hub rail along with other expenses to make the switch.

With the thoroughbreds racing at Hawthorne until late next summer, it would be nine months before another track make-over would take place, rather than just three.

Harness racing will likely return to Hawthorne, a year from now, sometime in September of 2023.  It’ll be the only time pari-mutuel racing in Illinois will take place for pacers and trotters all year long.

Hawthorne then would conduct harness racing through the end of 2023 and several weeks of 2024, about six consecutive months on its big mile oval.

Hawthorne (Suburban Downs, Inc) does plan on sponsoring a lengthy harness racing meet in Springfield next year, probably beginning around June but without pari-mutuel wagering.

Those Springfield dates are not allocated by the Racing Board since the meeting will be non-wagering and don’t have to be decided at this time. Instead, Hawthorne, the IHHA, the Illinois Department of Agriculture, and the Illinois County Fair Associations will work out a schedule to avoid as much as possible a conflict with the county fair racing circuit.

Racing on Monday and Tuesday afternoons at Springfield are in the discussion while a shortage of horses is the primary concern.

The purse money for the current Springfield condensed meet that concludes next Friday, September 30th, and a 2023 meeting on Springfield’s Illinois State Fairgrounds, is being made available by Hawthorne.

Call it a “loan” to the Illinois horsemen. Collection time will come when the Hawthorne’s Racino starts generating revenue, hopefully sometime in 2024.

Racino construction was to start in April of this year but that didn’t happen. September was then proclaimed as the next start date, but again it was a no-go. It’s now said that November is when construction begins and while there are those in the Illinois racing industry who are saying: “I’ll believe it when I see it,” this time it may very well materialize.

The Illinois harness horsemen’s purse account is about $2.5 million in the hole and is projected to be down between $2.7 and $3 million at the end of the year. With Hawthorne’s the current purse structure expected to continue when the Springfield meet pops up next year, that’s a lot of “skin” the racetrack has rather generously put up to keep the state’s Standardbred industry from further declining.

Although not bright, there is some light at the end of the tunnel.

Gals in Spotlight: Harness racing returns to the Illinois State Fairgrounds today with a 12 noon post time and it’s headed up by the $12,300 Open for filly and mare pacers.

The Megan Roger Stable’s Fox Valley Crete (Juan Franco), fresh from his Robert F. Carey Memorial championship 12 days ago, is back in action in race ten. Among the challengers is the Amy Husted trained Get E Up (Kyle Husted) who earlier captured Hawthorne’s summer Carey showdown.

Last week Casey Leonard had 11 winning drives on the first two days of the abbreviated Springfield meet. Cordarius Stewart was next with five winners.