By Mike Paradise
The Illinois State Fair Colt Stake championships are the last eight races on Wednesday’s 12-race program. Here’s how I see those races playing out.

$35,000 Two-Year-Old Filly Trot
Anna’s Lucky Star (Kyle Wilfong) wasn’t eligible to Hawthorne’s Fox Valley Flan Series so she was likely pointed for this stake for and owner and breeder Danny Graham of Salem, Illinois.
The Nelson Willis trainee didn’t make her first start until July 24 at Hawthorne but she came out ready with an easy win and followed with comfortable victories in her next two starts.
With the rail Anna’s Lucky Star has a big shot to make it four in a row.
Beatrice (Casey Leonard) had a strong effort in her elimination last week and looks like a major threat and so does Dandy’s ESP (Todd Warren) won got the job done in her elim despite a not-so-easy journey
Mike’s Pick: Anna’s Lucky Star

Trixie’s Jethro (Jared Finn) has won her last 5 starts and 6 of 7 as a freshman. (Four Footed Photo)

Freshman ICF colt trotters don’t come any more consistent than Charles Doehring’s Trixie’s Jethro (Jared Finn). The home bred gelding has won 6 of her first 7 career starts with the only blemish on her resume a second place finish about a month ago at Hawthorne.
Trixie’s Jethro likes to cut the fractions and as usual will likely be the one to catch this afternoon.
Matt Q (Casey Leonard) saw his four race winning streak snapped in his State Fair elimination and could be benefit from a start over tis clay track and avenge that loss.
Mississippi native trainer Roshun Trigg sends out a formidable pair in this take with elimination victor Louscipher (Jamaica Patton) and his stable-mate Lougazi (Jamaica), the runner-up last week to Trixie’s Jethro. The fastest mile among the ten starters belongs to Louscipher (1:58.2), a full second faster than any of his foes.
Mike’s Pick: Trixie’s Jethro

$35,000 Two-Year-Old Filly Pace
Trainer Nick Prather has the likely co-favorites in this division with Razzleme Dazzleme (Kyle Husted) from the one-slot and San Antonio Rose (Kyle Wilfong) from the seven-post. Both looked very good capturing their respective elimination divisions and Dan Antonio Rose did it in 1:52.4, two seconds faster than her stable-mate.
Razzleme Dazzleme has notched two series legs of the Hawthorne’s Incredible Tillie Stake Series of Lewistown, Illinois owners Derek and Amy Jacobus of Lewistown, Illinois and was disqualified from the top spot in the other and it was San Antonio Rose who was moved up and visited the winner’s circle.
A Real Doozie will have to step it up a notch to shed her bridesmaid role. She’s been second best in all of her last four starts.
Mike’s Pick: Razzleme Dazzleme

$30,000 Three-Year-Old Filly Trot
Praise Singer’s (Ridge Warren) upset at 23-1 odds in this stake’s elimination shook up this division for the final. The Mike Brink trained gelding had raced very poorly his previous start but whatever was ailing him, it was long-gone las t eek when he romped in a career fastest 1:57.2 mile.
The 10-hole was an obvious detriment to the division leader Surviver D I (Kyle Husted) who finished fifth after earlier winning eight season races and an amazing 18 victories as a 2-year-old for owner Steve Renard. The Steve Searle trained filly is in better shape for today’s with post seven.
Powerful Princess couldn’t stay flat last week and finished up the track. If you toss that race out you can see the Curt Grummel is a major contender with the pole position for driver Casey Leonard.
Mike’s Pick: Surviver DI 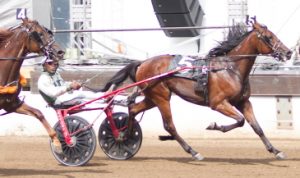 With Cardinal and recent Dygert series leg winner Hail Caesar not in this stakes final field Primed N Powerful should be a heavy favorite. Trained and driven by Freddie Patton Jr. for co-owners Ron Phillips (Athena, Illinois) and Erica Pechin (Platteville, Colorado), this Psychic Spirit gelding comes into the race in top form.
Primed N Powerful carries a three race winning streak into today’s tenth race and should grab command in good shape from the two-slot. He loves the front-end and he should have it.
Speedy Rendezvous got off to a slow start in his sophomore campaign but has picked things up nicely lately from trainer Nick Prather. Some confidence boosting wins at the fairs helped him be a close second last week to Primed N Powerful.
Mike’s Pick: Primed N Powerful

$36,000 Three-Year-Old Filly Pace
Drawing the outside seen-slot could make the task a bit more difficult for the rampaging Char N Marg who has dominated this division. She’s 7-for-10 this year and those losses came open competition.
The Nelson Wills trained has won all of her season races against other state breds for Chicago owners Quaid Racing Inc. Her last including her last four when she was put on Lasix
Unraced at two Bucklegirl Bobette (Kyle Wilfong) is having a solid 3-year-iold for the Walker family of Carrollton, Illinois and could scoot out at the start and be a major player today.
Lexington Lady (Bobby Smolin) landed the all-important rail in this stake and could be in line for an up-close trip for owner and trainer Hosea Williams. This will be her third start on Lasix.
Mike’s Pick: Char N Marg

$36,000 Three-Year-Old Colt Pace
The trio of Dan D Dune (Casey Leonard), Royale Rose (Matt Krueger) and BS Tyriffic (Kyle Wilfong) have taken turns beating each other all summer long and they’ll likely all get good plat at the betting windows for their Springfield showdown.
Dan D Dune had health issues early on but appears his sickness woes are behind hm. He uncorked a wicked 26.2 last quarter in the last Robert F Carey Series Stake leg at Hawthorne and drew away to a 1:53 flat mile. Last year he hauled in over $120,000 for the Willis family and notched the Filly Orange and Blue Championship on Super Night.
Royale Rose has been a lot better than her one win in nine season starts might indicate. She was disqualified out of a second Carey series stake victory and raced earlier at Hoosier Park in open company.
BS Tyriffic had a 1:52 fat mile in her Carey Series triumph in early July for trainer Bob Sanders and that’s a full second faster than any of her seven foes in today’s final have been able to pace.
Mike Pick: Dan D Dune