Homepage
You are here: Home1 / Mike Paradise2 / It’s That Time for ICF Freshmen to Sizzle

Summer doesn’t officially arrive until Wednesday, June 21st, but for many of us in the harness racing industry it coincides with the start of 2-year-old racing and that began a week ago at Hawthorne.

Of course with five consecutive days of temperatures reaching the 90’s, it’s been obvious, much to our dismay, that the Chicago area’s usual much-to-short spring season is already behind us.

Rain or shine the 2-year-old racing season in Illinois begins in earnest this week, with the opening legs of four ICF stake events. The four rounds of each freshman stake series will determine the starting fields for the Finals on Hawthorne’s Night of Champions on September 23rd.

Those championship fields are determined on a point basis with the 10 highest point recipients earning a starting spot in their respective championships. A victory in a series leg is worth 50 points. A second place finish is valued at 25, a third at 12, a fourth at 8 and a fifth at 5.

The Incredible Tillie for freshman pacing fillies gets under way Friday evening. The first season state-bred pacing colts and geldings square off in round one of the Incredible Finale stake series on Saturday. On Sunday Hawthorne hosts the start of the two Illinois bred stakes series for trotters, the Fox Valley Flan for the gals and the Kadabra for juvenile males. 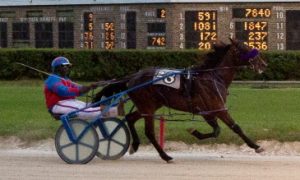 The first pair of two-year-old races at the Hawthorne meet went postward a week ago with the Herman Wheeler’s Fox Valley Jazzy (Tyler Shehan) pulling away by almost four lengths in 1:55 with a 27 flat last quarter. The Yankee Skyscaper filly is a starter in Friday’s second division of the Incredible Tillie.

M T Gunslinger, driven by his trainer Charles Arthur, was much the best in Hawthorne’s initial freshman colt and gelding pace, winning by nearly seven lengths. The Straight Shooter colt paced his mile in 1:55.1 and was well in hand at the finish.

Four qualifying races for two-year-olds will be contested before the start of tonight’s card and the first event on the Thursday nine race program is for 2-year-old pacing fillies.

Springfield held nine qualifiers on Tuesday morning and seven were strictly for 2-year-olds, five for pacers and two for trotters. Tom Simmons trained freshman finished first in five straight qualifiers, all driven by the Springfield based horseman.

Beach Shootingstar, a son of Straight Shooting out of the Somebeachsomewhere mare Look To The Stars, won his qualifier in 1:57.2 while preparing for Saturday’s Incredible Finale stake series. He drew into the first division of the ICF 2-year-old colt and gelding pace.

Making His Case: After five weeks into the meet, Casey Leonard is well on his way to notching his second consecutive Hawthorne driver title. The 39-year-old Harvard, Illinois native has posted 48 first place finishes, giving him 17 more than Mike Oosting (31).

Currently in third is Kyle Wilfong, with 26 winners and he’s followed by Kyle Husted with 18. The top five is rounded out with Kentuckian Tyler Shehan with 13.

Petrelli leads with 10 winners. Simmons, Brink and Taneyhill each have sent out eight winning horses, while Willis and Wheeler have had seven from their barns make a stop at the Hawthorne winner’s circle. 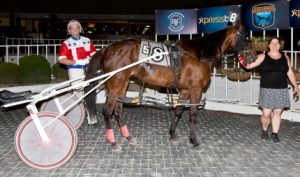 The 29-year-old Taneyhill, who is a native of Flint, Michigan, didn’t start a horse at Hawthorne until a week after the track opened and his stock has been on a roll since. Of his 16 starters at the meet, 8 have won. Two more were second, another three were third. In fact all 16 Taneyhill starters have earned a purse check.

Taneyhill has been doing it via the claiming box. He plucked Fresh Squeezed out of a $6,000 Hawthorne claimer on May 27th and the six-year-old mare went on to capture back-to-back $10,000 claimers in 1:52.4 and then was a close second to OK Heavenly in last Saturday’s Filly and Mare Open Pace.

Next Issue was taken by Taneyhill out of a non-winner of two event with a $10,000 (plus allowances) price tag at Hoosier Park on May 15th. He put the 4-year-old gelding on Lasix and the pacer has now gone 3-for-3 in Hawthorne conditioned-claiming races.