Homepage
You are here: Home1 / Mike Paradise2 / It’s the Return of the ICF Titans

After a three-week absence our version of the “Battle of the Titans” returns tonight when ICF standouts He’zzz A Wise Sky and Fox Valley Gemini square off with the return of Hawthorne’s $12,000 Open Pace.

The last time these two Illinois bred star pacers tangled was back on July 9 with He’zzz A Wise Sky coming out on top in his usual front-stepping fashion. The victory by the John Filomono trained four-year-old broke a tie of three victories apiece against each other at the meeting. 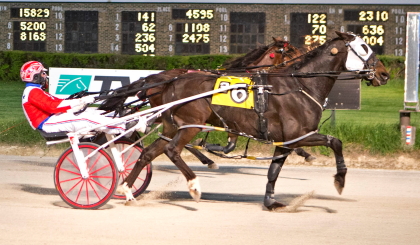 Fox Valley Gemini (outside) and He’zzz A Wize Sky (inside) will renew their rivalry in tonight’s $12,000 Open Pace. (Four Footed Fotos)

Fox Valley Gemini (Casey Leonard) needs a win tonight to even the score against his adversary, however landing the outside nine-hole with a large field does make tonight’s task an arduous one.

Three Friday’s ago, Casey ducked Fox Valley Gemini from the seven slot and even a wicked :25.4 last quarter couldn’t overtake He’zzz A Wize Sky since the Jim Ballinger owned pacer was six and one-half lengths behind his chief rival at three three-quarter pole.

A week earlier Casey gunned ‘Gemini” out from the nine-hole and got a two-hole journey behind the star of the Triple ZZZ stable who paced a sizzling 54.4 half. “Gemini” put on a late surge to notch the six-year-old’s 43rd career victory.

So, what’s the strategy from Hawthorne’s perennial leading driver this time around? We’ll have to wait until the eighth face tonight to find out.

There’s no shortage of drivers in tonight’s feature that would love to have a two- or three-hole trip with their horse behind He’zzz A Wize Sky, so a quick first panel is almost a certainty.

He’zz A Wize Sky and Fox Valley Gemini drew for the 8 and 9 posts.

While the two state-bred icons have been almost even-steven in this season’s confrontations, interestingly the betting public’s support has gone to He’zzz A Wize Sky the last five times the pair have gone head to head.

The only time “Gemini” has gone off as the favorite against his chief rival was on May 16 when the Terry Leonard trained pacer was impeded in the stretch and finished fourth, the only season start he hasn’t been first or second in his eight outings

Eying the State Fair: Racing at Springfield gets under way in two weeks and with eliminations for the Illinois State Fair Colt Stakes races for two-year-olds on Friday August 13th, several trainers have decided to have their youngsters compete tonight to stay sharp.

“Ozzy” has nailed down comfortable victories in the first two legs of the Incredible Finale series as well as a division of the Cardinal.

Nine of the 10 horses going to the gate in the seventh race have competed in the Night of Champion stake series including such other Top Ten standing point earners as Major Grin (50), Fox Valley Crete (37), Magazine Theme (33), Pericles (13) and Kingofmyheart (9).