By Mike Paradise
IYQ YQR and Royale Rose each took a major step towards Hawthorne’s Night Of Champions on Sept. 10 by posting victories in their respective second leg divisions of the Robert F. Carey Memorial Stake Series for ICF pacing colts and geldings.
Despite a month off the 8-5 co-favorite IYQ YQR, driven by his trainer Trenton Watson, captured the first Carey division in comfortable fashion with a career fastest 1:54.2 mile for his fourth career win in six starts.

(Four Footed Photo)
After first Red Dog Ryan (Dale Hiteman) and then Sagebrush Sam (Casey Leonard) exchanged early lead changes Watson took IYQ YR out of third and the home bred colt brushed to the top soon after the half was reached in 58 flat.
Unraced as a 2-year-old IQY YQR opened up some distance between himself and his challengers at the 1:26.1 three-quarter pole and under some urging held off the other 8-5 co-favorite He Gone Jack (Matt Krueger) by one length. Bowfortyova (Kyle Husted) won the photo for third.
The winner is owned by the Watson Stable of Fairfield, Illinois.
In the second $12,500 Carey split, the tougher of the Saturday night divisions, the 6-5 public’s choice Royale Rose (Matt Krueger) gained a hard-fought neck decision over BS Tyriffic (Kyle Wilfong). 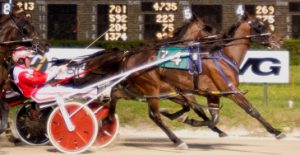 (Four Footed Photo)
Instead of racing in his usual come-from-behind fashion BS Tyriffic was hustled away from the starting gate by Wilfong and grabbed command. After a 28.3 first quarter BS Tyriffic took the eight-horse field to a 58.1 half with Holdonwe’reolling in the pocket and Royale Rose coming on first up.
Royale Rose got even with the leader quarter of a mile to go and battled BS Tyriffic all the way to the wire before gaining a neck decision in 1:53.3.
Dan D Dune, who a second over trip from Casey Leonard, was a close third while Holdonwe’feolling (Todd Warren), who never did get racing room ended up fourth but about one length behind the winner.
Royale Rose is trained by Lance Scurlock for owner Nicole Potts of Grant Park, Illinois.
Early Post: Hawthorne added two races to its Sunday card. With a 14 race program it also moved up its first post Sunday to 7 pm (Chicago time).
The additional races Sunday should bode well for the mutuel handle since most people are off for the Fourth of July Monday and while the moving up of the post time by 35 minutes certainly makes sense it only does if people know about it.
Hawthorne’s home web-site had no mention of the earlier post on it over the weekend. In fact, it still ran a promo “Harness Racing Continues, First Post 7:35” on the top of the home page Sunday morning.
Sunday’s card will be headed up by a pair of $10,000 Open Paces.
The Leonard Stable’s Nat A Virgin, winner of her last two races, and five-time season victor Seeyouatthefinish (Kyle Husted) from the barn of Deb and Bernie Paul are the likely ninth race filly favorites,
The Jim Ellison Stable’s Freedomofmysoul (Todd Warren) is the 2-1 program choice in the colt and gelding event that follows. The venerable Fort Silky (Casey Leonard) makes his first start since early February in the race. The 10-year-old owns 58 career victories and is less than $2,000 short of $800,000 in purse earnings.