Andrew and Diane Chudzik’s talented pacer Kolt Power, one of major threats in Saturday’s featured Open Pace, was an infrequent visitor to a winner’s circle until he joined the John Zawistowski Stable.

The Dragon Again gelding won only one race as a 2-year-old, a 1:53.3 mile at Pocono, and just one as a 3-year-old at Yonkers, a 1:56.3 clocking for his previous owners. This year he’s captured five races for his Plainfield, Illinois owners and he’s been a winning money-maker at Hawthorne where he hasn’t missed a purse check. 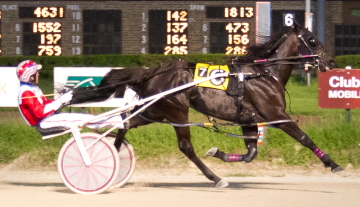 In his 9 local starts the 4-year-old Dragon Again gelding has come away with 4 wins, 2 seconds, 2 thirds and a fourth place finish mostly facing the top Open pacers on the grounds and he lowered his mark to 1:51.2 last week with Casey Leonard.

“I had some horses with Andy years ago,” said Zawistowski. “I had him send Kolt Power to a friend of mind (trainer) James Petrucelli but the horse ended up racing poorly and was sulking. I told Andy to have the horse sent back to me and I’ll see what I can do to get him turned around.

. “I worked the horse hard to get his attitude changed. Every time he started to sulk I got after him. Nothing abusive but I wanted to make sure I got his attention.

“Now he’s at the point where he likes his work and be likes being on the farm out here (in Plainfield, IL). The horse looks like a million dollars. He fits against these horses at Hawthorne,” continued the Chicago native.

“I have to give credit to Dale Hiteman who did a great job with the horse when he was driving him. Dale braved him up out there and now he’s a much more confident horse.  Casey did a very nice job winning with the horse last week when Dale wasn’t available and will be back drive him Saturday.

“Even though the horse was racing poorly when I got him, I knew the horse had talent. It was just a case of bringing him around, and he did.

Kolt Power was handicapped with the 10-hole in Saturday’s $10,000 feature and has his work cut out to pick-up another Hawthorne victory.