Driver Kyle Wilfong made his 1,000 visit to a winner’s circle Saturday afternoon and it had to be one of most memorable for the 27-year-old Illinois native.

Wilfong’s victory with You’remyhearthrob in the first split of the Illinois State Fair Colt Stakes 3-year-old colt elimination ended the winning streak of division kingpin and previously unbeaten Fox Valley Gemini at 16 in a row.

The Brett Wilfong trained winning gelding did it in a quick time of 1:50.3, easily a new career mark for the Some Heart Throb home-bred owned by Mr. Lynn and Barbara Wilfong of Kentland, Indiana and trainer Brett and Candice Wilfong of Pendleton, Indiana.

Kyle hustled You’remyhearttrob away from the three-slot and the 7-1 longshot out-sprinted the Fox Valley Gemini (pp 1, Casey Leonard) to the front going into the first turn. The winner paced a 26.4 first quarter and took the field to a 55 flat half with Fox Valley Gemini on his back, just waiting to pounce on the leader.

“Gemini” got his chance at the top of the lane and did get into high gear but You’remyheartrob was best this afternoon, putting away the bid of the Terry Leonard trainee who was all-out to hold off Al’s Brief for third. 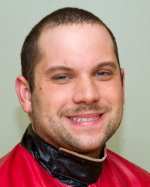 The second division of the colt pace also didn’t go as expected when Dandy Dune got a terrific trip from driver Ridge Warren and pulled off an upset at 8-1 odds for trainer and owner Dane May of Newton, Illinois.

Dandy Dune made the front with a quick 26.3 first panel, gave it up to the 3-5 favorite Backstreet Lawyer, and then came out of the pocket in the lane and paced his fastest ever winning mile of 1:52.2. Backstreet Lawyer and Bootleg Island ended up in a dead-heat for second place.

Easy Does It: Saturday’s 20-race program got under way with a prep event for ICF 3-year-old filly trotters and it turned out to be an easy win for the Steve Searle trained Trotting Grace. Driver Kyle Husted put the Cassis filly on top at the half (58.1) and Trotting Grace ($7.40) drew off in the lane by almost five lengths with a career best 1:54.4 mile for owners Bill Wright (Morton, IL), Mystical Marker Farms (Valparaiso, IN) and trainer Steve Earle (Grant Park, IL),

Maui Mama got a pocket trip but was a non- menacing second while White Pants Fever, who broke at the start, came a long way to be third. All 10 starters will return for next week’s $25,000 championship.

The prep for ICF sophomore trotting colts and geldings was next. The betting public set off Majestic Caprice (Mike Oosting) at heavy 3 to 5 odds and the Roshun Trigg trainee didn’t disappoint, knocking two-fifths of a second off his previous best mile with a 1:56.3 clocking.

Owned by Mississippians D & J Racing Stables (Terry) and Roshun Trigg (Brandon), it was the eighth season win for the son of Malabar Aqua. Big Lou edged Don’t be Cheeky for second place honors, beaten less than one length.

Freshmen Take Over: The rest of the first Saturday races were all Illinois State Fir Colt Stake elimination races for 2-year-olds.

Encantado ($3.80), from the barn of trainer Jim Eaton, was a comfortable 3 and 1/2 length winner in the first elim for the freshman filly trotters. Driver Casey Leonard moved the Lou’s Legacy filly out of the two-hole on the backside and to the front where she went on to her third victory in four lifetime starts for Illinois owners Phil Langley (Frankfort), James Schwarz (Wooddale) and Eaton (Crete).

Also moving on to the $27,500 final were the second through fifth place finishers Skippymalou, Heidi High, Lou’s Paramour and Friday’s I’m In Love.

Steve Searle notched his second training win of the afternoon when Louzotic ($4.40) rolled to her fourth consecutive victory in the second 2-year-old filly trot split as the 4-5 public’s choice for owner Flacco Family Farms of Alexis, Illinois.

The Lou’s Legacy filly was settled into fourth early, pulled out on the backstretch and brushed to the top before the 58.3 half and then held off bids from the second and third place trotters Puddin Cheeks and E L Game On. Loussolataire and Fox Valley Elicit also advance to the final.

The first surprise of the afternoon came in the initial 2-year-old filly pace division when Tim Curtin rallied Fox Valley Lil Kim ($15.60) to a winning 1:54.2 victory for owner and trainer Kim Roth of Crete, IL). Fox Valley Halsey took second , beaten one length, and Valar Morghulis was third. Also advancing to the championship were the fourth and fifth place fillies Fox Valley Lolo and the 3-5 beaten favorite and Brienne The Beauty.

The Jay Garrels trainee Perch powered her way past the leaders in the lane with a convincing 1:55.2 triumph in the second juvenile filly pace giving driver Kyle Wilfong career winner No. 999. Perch was sixth in the early going, picked-up live cover from Foolishlittlegirl at the half, and proved fastest in the stretch for owners Del Insko Training Stable (South Beloit, IL), Susan Garrels (Shipshewana, IN) and Jay Garrels (Clinton, WI).

Recent Incredible Finale winner Maximus (Casey Leonard) was hammered down to 2 to 5 odds in the first 2-year-old colt pace division but ended up a non-threatening fourth as Mr P M, well driven by Cliff Bell took advantage of his slow 59.3 first half and held off runner-up Ryan Racketeer for a 1:55.4 victory.

The often unpredictable ICF 2-year-old male trot division was full of surprises. First unbeaten Fox Valley Picaso, winner of the Cardinal and two legs of the Kadabra, made a break on the backside and eliminated himself. A bit later the pacesetter Louscardamon, fresh off his own Kadabra victory, looked to be home free at the top of the lane but instead went off-stride.

Taking advantage of the situation was Trixie’s Turbo, driven by John D Finn for trainer Heather Stell. The Cassis freshman came on for his fourth win in five career starts for owner and breeder Charles Doehring of Brownstown, Illinois. The photo for second in the 1:59.2 mile went to Lourhianon over Lous Endeavor. Captainblacksparrow and Prince Cassius also moved on.

The second freshmen colt trot was taken by Lousraptor ($8.40) giving driver Tim Curtin, trainer Roshun Trigg and owner Flacco Family Farms of Alexis their second winner on the early card. The 8-5 favorite Big Garcia Vega settled for second. Also getting into the final were For Trots Sake, Crackerbill Bill and Foxvalleyrushhour, 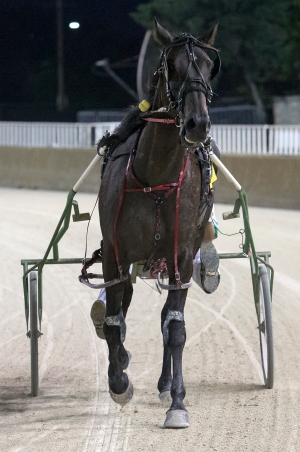 There’s More: The second Saturday card brought out 11 second season ICF pacing fillies for its Illinois State Colt Fair Stakes elimination. With the 10 first finishers advancing to its $25,000 Final the race was more of a prep for many of the division leaders.

The Mike Brink Stable’s Allbeastnobeauty ($10.00) was brushed to the top at the half (56 flat) by driver Mike Oosting and the Sportsmaster filly won for the fifth time in 10 season outings. Her time of `1:52 flat knocked off almost two seconds of her previous fastest mile for owners Josh Carter (Williamsville, IL), Mark Brown (Chatham, IL), Lawrence Crawford, Port St. Joe (FL) and Mike Brink (Springfield, IL)

Fox Valley Jazzy finished in a hurry to be second while Rollin Coal took third. The lone filly jettisoned from the final was the 11th and last place finisher Fox Valley Catwalk.

A quartet of $7,000 Illinois State Fair Colt Stake championships for older ICF horses of both gaits and sexes were contested with the colt and gelding trot going to the 9-1 longshot Primed N Powerful ($21.00), driven by his trainer Jamaica Patton. The time of 1:53.3 was a new lifetime mark for the 5-year-old state-bred trotter owned by Ron Phillips (Athens, IL) and Sherry Boledovich (Lake CO).

The championship for pacing mares ages four and up turned out to be a two-horse race with Fox Valley Charm (Casey Leonard) getting up in the final strides to edge the front-stepping Bucklegirl Bobette (Travis Seekman) at the end of a quick 1:51 flat mile. Fox Valley Charm is trained by Clay Simpson for Sherman, Illinois owner Peter Karras.

Jamaica Patton drove his second winner of the day when Fox Valley Reggie ($18.60) pulled off a bit of a surprise in the aged colt and gelding pacing championship with a 1:51.1 clocking, another lifetime best mark. The 4-year-old is trained by Jamaica for Ron Phillips (Athens, IL) and Sherry Boledovich (Lakewood, CO), their second champion of the afternoon.

Maybe it was only fitting that Kyle Wilfong was back in the winner’s circle with his final drive of the afternoon when Anna’s Lucky Star crushed her field in the aged trotting mare championship for Salem, Illinois owner Danny Graham.

The mile of 1:53.1, shaved two-fifths of a second off her previous fastest time for trainer Nelson Willis and gave Kyle his 1,001 career dash winner and no doubt a smile on his face before his long three hour-plus drive to Hawthorne for Saturday night’s races.