Homepage
You are here: Home1 / Mike Paradise2 / Late Closer Gamble a Let Down 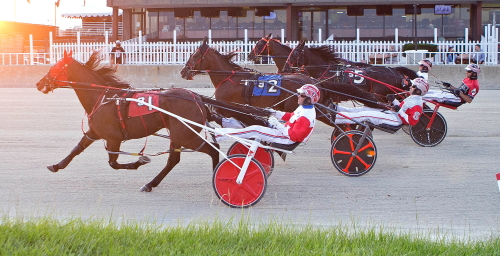 They’ll be coming down the lane tonight at Hawthorne Racecourse (Four Footed Fotos).

During the offseason Hawthorne management deliberated how to spend the purse money for this year’s meets.

Should all the money be spread around or should some be put into some specific races, boosting those purses, and making them attractive enough for owners and trainers of horses not likely coming to the local meet to perhaps do so?

So, how did it all turn out?

“We thought it would attract “outside” horses to our meet, but it didn’t.”

A check of the final 10 horse field for both the earlier filly and mare and colt and gelding divisions were pretty much saturated with horses from trainers who were going to race at the winter meet.

In the end Brittany Dillion’s Foxy Fiji (Mike Oosting) breezed in the distaff final, five lengths the best. The mare also won a series leg and was third in another. The Jim Eaton trained Bet Mind (Kyle Wilfong) took the male division to go along with a first and a second in his series legs.

What seemed like a reasonable venture by management just didn’t pan out.

Open Nixed: The $13,700 Open Pace wasn’t carded tonight. With only five entries (He’zzz A Wise Sky, Francis Underwood, Gotham Hanover, Straight Up Cool and The Thunder Rolls) the race was probably one entry short of being on the program.

Tonight’s feature is the second race conditioned pace that carries a $11,700 purse and is headed up by the Steve Searle trained Fox Valley Ren, fresh 0ut of the Open Pace ranks.

The five-year-old Sportsmaster gelding will be handled by Todd Warren from post two in the six-horse field and is listed at 6-5 odds in my line.

Bates Returns: The driver colony got another boost with the return from Ohio of Brandon Bates, a perennial top ten driver at Hoosier Park.

Bates, of course, is no stranger to Hawthorne. The Indiana native had success on the local scene last year before going to his “home” track at Hoosier where he ended up the year with career highs in wins (188) and money won ($2.55 million).

Those who have been followers of my mine though the years know that I like to take a “flyer” and select a couple of longshots on the card, called “Mike’s Price Shots:  It didn’t take long to have a successful one. Sunday night’s “Price Shot” SB Early Edition (Travis Seekman) popped at $31 in the fifth race.

Mike Paradise Is Back Talk About a Turnabout
Scroll to top