Homepage
You are here: Home1 / Mike Paradise2 / Late Closer’s a Hit with Locals

While the increased purses on the Late Closer series didn’t bring the desired number of out-of-state horses that Hawthorne management wanted, it nevertheless was a big hit with Illinois based horsemen.

“I’ve watched a lot of our horsemen go up to Hawthorne management and thank them for the more rewarding Late Closer purses,” said the meet’s perennial leading driver Casey Leonard.

“Hawthorne may not have gotten what they wanted from “outside” horses coming in for the series but our horseman are very appreciative they are racing for these bigger pots.”

“My owners are tickled to race their horses in Hawthorne’s Late Closers. They’re going for good pots and race at least three straight weeks.”

Based on what has occurred in the first two legs of the Winter Wonderland Series, there’s a very good chance that Illinois trainers (and in most cases owners) will cash in this weekend.

The trio of $22,000 finals will be headed by horses all under the care of Illinois horsemen. 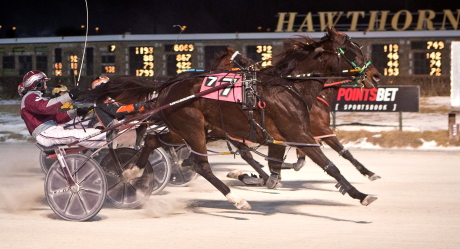 This is the kind of finishes we may be seeing when the $22,000 Winter Wonderland Series Finals are contested this weekend. The John Pritchard trained Illustrate (Juan Franco) is shown here rallying to win her second leg of the filly and mare Late Closer by a head over Found My Rock (inside, Kyle Husted). (Four Footed Fotos)

The Nelson Willis Stable’s Rex Boston carries a three-race winning streak into Saturday’s colt and gelding championship for the Megan Rogers Stable of Chicago, while the Gerald Hansen trained Advance Man rebounded nicely to win his series event after a break in the opening leg to make the male pacing final for his Kentucky owners.

The veteran trainer Willis also had the first leg winner of the colt series when Walkin Papers popped for his wife Cynthia Kay (Beecher, IL) and the Engle Stable (Northbrook, IL).

Payback Time: Illinois champion He’zzz A Wise Sky is back home and looking for payback after his drubbing last weekend in Ohio.

The five-year-old Yankee Skyscaper stud was a disappointing sixth in Miami Valley’s $30,000 Open Handicap after, as expected, cutting the fractions.

Parked out to a sizzling 26.3 first quarter leaving from the nine-hole, He’zzz A Wise Sky started to shorten his stride turning for home and was wrapped up by catch-driver John Delong part-way down the lane.

The last time He’zzz A Wise Sky lost was in November when he was scorched to a 26.2 first panel to make the front and ended up fifth in a Hoosier Park Open.

The John Filomeno trained pacer, as anticipated, was assigned the eight-slot in tonight’s sixth race feature where the usual group of locals will try to end the pride of the Triple ZZZ Stables Hawthorne winning streak at four in a row.

Staying Hot: We went one-for-one on Sunday’s “Price Shots” when Fox Valley Quest clicked in the sixth race trot at $15.40.

IHHA Board Meets With Hawthorne Series Sweeps in the Cards?
Scroll to top