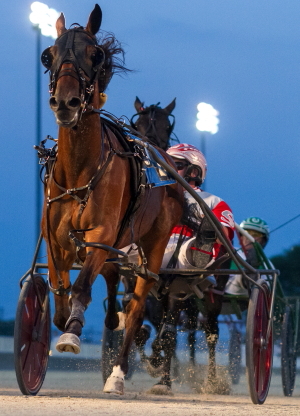 A couple of filly and mare pacing events Friday night have implications on the upcoming Night of Champions Tony Maurello stake for ICF pacing mares, ages four and up..

Both Saturday’s ninth race $12,000 filly and mare Open Pace and a conditioned event that follows will likely see some of its participants enter next week’s Maurello eliminations.

The Terry Leonard stable’s streaking Rockin N Runnin (Casey Leonard) is the 9-5 early favorite to extend her local winning streak to four in a row in Saturday’s distaff Open despite being handicapped with the 10-slot in a full field of pacers.

However Rockin N Runnin and the race’s second choice It’s Time For Fun (3-1, Kyle Wilfong) are Indiana bred mares, making them ineligible for the Maurello.

The tenth race conditioned pace has a number of ICF mares competing and two of them, Whiskeronkittens (Luke Plano) and JB’s Shooting Star (Travis Seekman) are possibly Maurello bound. Both mares spent their season out-of-state and came back to Illinois to compete last week and tonight most likely preparing for the Maurello,

Whiuskeronkittens, now six and in the care of trainer Kimberly Roth, has had a very solid racing career for Anna, Illinois owner Ronald Knupp with $263,186 in purse earnings in less than five seasons of racing. The Party At Artsplace mare’s next win will be her 30th. 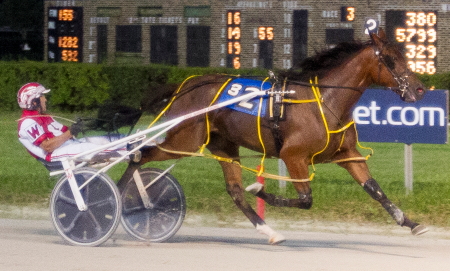 Whiskeronkittens most successful season came as a three-year-old when she won Hawthorne’s $100,000 Plum Peachy championship. She started off her sophomore campaign with a sweep of a Late Closer series during Hawthorne’s 2016 winter meet and later won an Open in the summer session.

Last year Whiskersonkittens finished second in her Maurello elimination but make a break in the championships and was disqualified from fourth to ninth.

JB’s Shooting Star raced as a four-year-old in Ohio and Indiana until she was laid off in mid-May. The Straight Shooting mare obviously needed her Hawthorne start a week ago after being on the sidelines for three and one-half months. The mare won a $25,000 Open at Miami Valley Raceway back in late January.

In 2018 JB’s Shooting Star had a big effort on the Night of Champions, dropping a neck decision to The New Americana in the $125,000 Plum Peachy showdown for trainer Bill Crone.

When the Illinois racing season concluded in late September the mare made 10 more starts, in Indiana or Ohio, and didn’t miss a purse check for Illinois owner John Barnard. JB’s Shooting Star ended last year with a triumph in the $18,000 distaff Open at Ohio’s Dayton Raceway while competing out of the barn of trainer Jace Sundeen.

Another possible Maurello starter from tonight’s tenth race is Hosea Williams Rollin Coal (Juan Franco). The mare has blossomed as a four-year-old by banking $43,359 for her Chicago owner and trainer. Among her seven season victories was Hawthorne’s June 23rd Open with a career fastest mile of 1:51.4. She went on to collect a check in her next seven consecutive Chicago circuit Open starts.