Homepage
You are here: Home1 / Mike Paradise2 / Look Who is Prominent Again in Illinois

A number of years have passed since we’ve seen the name Erv Miller among the leading trainers at a Chicago circuit harness racing session, however, that’s no longer the case.

The Midwest division of the Erv Miller Stable goes into this weekend of racing sitting third in the Hawthorne trainer standings, five winning horses behind the Terry Leonard Stable and only one behind trainer Steve Searle and that’s with about 50 less horses going postward than the two leaders.

Locally, Erv’s horses are winning at a high-level 26 percent clip. It’s the same success rate his horses are doing at Hoosier Park, where he’s also third in the trainer rankings. 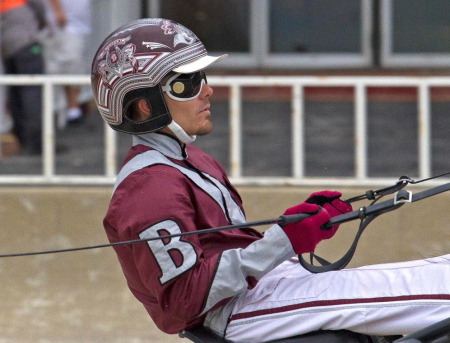 Much of the credit for the stable’s success at Hawthorne and Hoosier must go to Erv’ s daughter Hannah and her husband Atlee Bender. The March newlyweds have teamed up to effectively manage Miller’s 50-horse Midwest division farm, based in Indiana.

The stable’s success at Hawthorne has given Bender a chance to gain more catch-drives on the local scene and Atlee certainly has made the most of that opportunity.

Bender didn’t start driving professionally until 2016 and going into 2021 the 29-year-old Goshen, Indiana native’s highest number of drives in a year was only 80 in 2019.

With almost two more months left at Hawthorne, Atlee has already been behind 228 horses going to the gate on the Cicero, Illinois one-mile oval and won with 39 of them, tying him for fourth place in the driver standings with Todd Warren.

“I didn’t expect things to go so well for me at Hawthorne,” said Atlee. “I’m just trying to take advantage of the opportunities given to me at the meet.”

Bender’s 17.1 winning percentage is third best behind the meet’s leading driver Casey Leonard’s 19.4 per cent and the 17.4 rate of Kyle Wilfong. Casey has 72 Hawthorne wins at the meet and Kyle is right there with 63.

It’s not uncommon to see Bender’s name listed 7 or 8 times a night on a Hawthorne program. As they say: “Success Breeds Success,” and Atlee is without a doubt having a very productive meeting.

Even with the stable’s rise to third in the current Hawthorne trainer standings, Atlee has even higher expectations at the meet.

“We want to be the top stable when the Hawthorne meeting ends,” said Atlee. “That’s our goal.”

With a full mile oval and a very long stretch, Bender has learned that patience is indeed a virtue competing at Hawthorne. As a result, a large amount of Atlee’s victories are coming with horses off the pace.

“I like to let others battle it out in the early going, size up the situation, and then come on with my horse in the last three-quarters of the mile,” added Atlee.

The Hawthorne data shows that Bender’s strategy is paying off handsomely for himself and the Erv Miller stable.

No Rest Tonight: Bender will be a busy man Saturday evening with 10 drives on the 11-race program, including the Rob Rittof stable’s Tempest Seelster in the second race Open II feature for fillies and mares.

The eight-year-old mare leaves from the four post in a six horse field drawn by groups with last week’s Open II winner Rock It Out (Kyle Wilfong), the 9-5 programmed favorite, assigned the outside six-slot.

The first two posts were drawn with My Uptown Girl (Ridge Warren) getting the one and Rollin Coal (Juan Franco) the two. The three through five went to Primo Extremo (Wyatt Avenatti), Tempus Seelster, and Fox Valley Exploit (Kyle Husted), in that order.

He’zzz A Wise Sky was parked out to a sizzling 26.3 first quarter to get command by Lying In Cash and the eventual runner-up Bobcat Bay (Ridge Warren) , and ended up only third best, beaten one and one-half lengths.

Fox Valley Gemini (Casey Leonard) had to settle for fourth, another half-length behind.