Homepage
You are here: Home1 / Mike Paradise2 / Looking Back: Promotions to Remember

In the 1970s’ and 1980’s, the hey-days of harness racing in Illinois, the Chicago circuit racetracks were raking in the dough with on-track seven-figure mutuel handles and five figure attendance figures nightly.

With their sport booming, spending plenty of money on promoting their sport was the norm and no Illinois harness track did a better job of doing just that than the now defunct Sportsman’s Park.

Strolling down memory lane I came up with some of my favorite promotions, in no particular order, at the old Cicero, IL horse racing facility:

Free Daily Double Bet Night: It came about on a Friday evening in the early 1980’s. Every paying patron ($2.00 Grandstand, $3.25 Clubhouse) received a coupon at an admission gate for a free $2 Daily Double ticket.

Close to 18,000 customers showed up that night and the Daily Double Pool was more than $20,000 higher than normal. When the winning Double paid a little over $14, there were thousands of winners much to the delight of management.

The initial $36,000 cost of free tickets was reduced by 20 per cent after the Daily Double handle takeout and from 18 per cent (win-place-slow) up to 25 per cent (Trifectas) each time those $14 Daily Double winners bet on another race, so the final cost of the promotion was likely under $10,000.

Since the horsemen got an equal share of on-track betting at that time, the Free Daily Double bet promo certainly padded their purse account as well.

Free Music Concerts: In the summers of 1975 and 1976 Sportsman’s Park hosted hour-long concerts before and after races with a stage set on the race-track directly in front of the Grandstand where there was seating for over 10,000 people.

Standing room on the tracks apron put patrons right up to the stage.

A long flat-bed trailer, kept between races on the racetrack’s chute, provided the backdrop and a changing room for the entertainers, and was equipped to “plug in” to the track’s sound system. The TV department had its front-row area to telecast each performance throughout the facility.

Some of the top entertainers from that era who performed include the legendary Chuck Berry, Ike and Tina Turner, Chubby Checker, B.B. King, Captain and Tennille, Blood Sweat and Tears, Doc Severinsen and comedian Redd Fox of the old popular TV show Sanford and Son. 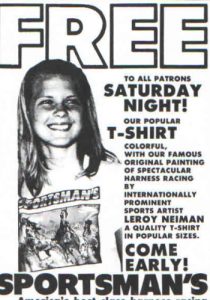 Free T-Shirt Nights: This particular promotion was held a few times and delivered huge crowds on each occasion.

When a friend of mind in the recording industry one summer gave me a Donna Summers T-shirt to promote her new record, I thought why not T-shirts plugging our sport?

It would provide free advertising of Sportsman’s harness racing each time a person wore their free T-shirt outside the racetrack.

Sportsman’s was not only the first track to have this giveaway it was the first racetrack to even sell harness racing T-shirts. At that time when I was serving as the track’s publicity director, only two T-Shirts shops were doing business in the city of Chicago, one on the north side and the other on the south.

I went to the Chicago north side shop and arranged for harness horse caricatures to be put T-shirts, as well as and women’s tank-tops. I had them add the mottos Let’s Horse Around, I’m Hot to Trot, I Lost My Shirt at Sportsman’s Park, and Horse Power. The T-shirts came in different colors and sizes and delivered to the track on a trial basis. As turned out the facilities concession stands couldn’t keep up with the demand on them. 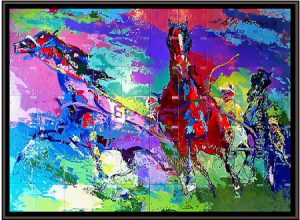 Leroy Nieman Nights: The next year Sportsman’s Park had another Free T-Shirt Night but this time it was a light blue shirt in assorted sizes with a colorful silk screen image of the racetrack’s original harness racing painting by the world renowned sports artist Leroy Nieman.

The same famous Nieman harness racing painting, along with a thoroughbred portrait by the prominent artist, in previous years was transferred to ceramic tile and provided a large and spectacular entranceway to the track’s Clubhouse.

Men’s and Ladies Nights: Both promo evenings offered only a 25 cent tax admission to the Sportsman’s Park. On the Wednesday, August 18 Men’s Night a drawing was held with the winner getting a Super Bowl XI weekend for four that included airplane tickets, hotel accommodations for three days, four tickets at mid-field for the January 1977 Super Bowl, and $500 in cash.

Later that summer on a Saturday night there was an on-track drawing at Sportsman’s Park on Ladies Night for a full-length Mink Coat personally tailored for the lucky winner and in time for the upcoming winter.