As most fans of our sport know, stake races are never handicapped. It’s the luck of the draw that always determines post positions. However, sometimes the draw works out where a likely overwhelming favorite, does end up on the outside looking in.

That’s the case Sunday night for the second leg of the Beulah Dygert stake series for ICF sophomore filly trotters.

Louzotic, the star trotter of the Steve Searle stable, will have to buck the outside nine-slot with driver Kyle Husted, in the $12,500 co-feature, when she goes after her fourth consecutive and her third added money event of the season.

The Lou’s Legacy filly, owned by Flacco Family Farms of Alexis, Illinois was the runaway the choice last season for the Illinois Two-Year-Old Trotting Filly of the Year honors, after capturing just about every major victory in her seven triumphs while she was hauling in over $96,000. 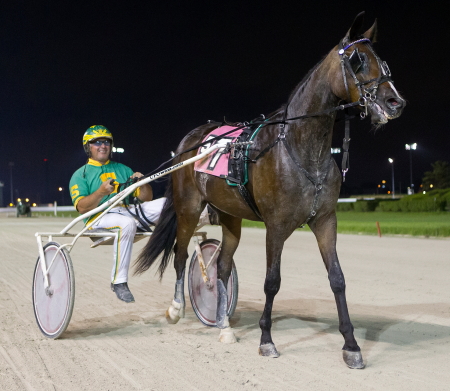 This year the filly has been just as assertive in her recent outings after trainer Searle turned over the lines to Kyle Husted.

Searle also sends out Lou’s Paramour (Ridge Warren in the $12,500 event, the third place finisher in the recent Violet and the runner-up in last week’s $11,995 Downstate Classic on the Carrollton fair track). She didn’t draw much better than her stablemate, acquiring the seven position.

On the other hand, Charles Arthur’s Heidi High (Juan Franco), finally received her due. The New Balance filly obtained the favorable two-slot, after having to leave from the 10 and 9-holes in the Violet and first Beulah Dygert leg and was the bridesmaid both times to Louzotic.

Searle’s hopeful in the second of two $12,500 divisions of the Erwin Dygert Memorial stake didn’t fare well with the draw either. The stable’s My Dreamweaver has the outside six-slot in the tougher of the colt and gelding trot divisions.

Inside of My Dreamweaver are Trixie’s Turbo (pp 2, Tyler Shehan) and Lousraptor (pp 4, Casey Leonard), each a winner of the their recent Cardinal divisions and sandwiched in between is Lourhianon (Luke Plano), the 2-1 morning line favorite who swept the Daryl Busse series earlier at the meet.

Meanwhile the Searle stable’s Louscardamon (Kyle Husted), is in a good spot to make it back-to-back victories in the Night of Champions stake series. The trotter has the three post in the second race first split for 3-year-old colts and geldings. He comes off a romping five length win in his $6,957 division of the Downstate Classic for owners Flacco Family Farms and Dr. Patrick Graham of Pittsfield, Illinois.

Trained by Nelson Willis, Anna’s Lucky Star had two terrific winning Open performances in late May and early June. However, she had to go to Indiana to get raced when Hawthorne’s usual Sunday feature then failed to attract sufficient entries.

Second Quarter Did It: Races can be won or lost from the get-go and that was the case last night when Fox Valley Triton, nicely handled by Casey Leonard, knocked off the 1 to 2 favorite Meyer On Fire, in the first division of the Robert F. Carey stake series for ICF 3-year-old pacing colts and geldings.

Casey hustled Fox Valley Triton out from the outside seven slot and made the front before the first turn was completed, while this season’s double-stakes winner Meyer On Fire was ducked at the start by driver Kyle Wilfong from post six.

Meyer On Fire raced outside of the eventual Terry Leonard stable winner, through a quick 27.2 third quarter through the last turn, but the trip took its toll and Fox Valley Triton pulled away in deep stretch, proving best by almost three lengths in the 1:53.3 mile.

Meyer On Fire finished second, with The Bucket a non-threating third.

No Maximum Effort: The heavy favorite Maximus ($2.40) with Wilfong, had things go their way in the second Carey split and they were never seriously challenged. The Ken Rucker trained sophomore cut leisurely fraction times of 28.4, 58.4 and 1:28.1, before sprinting away to a 1:55 clocking.

Coming Up enjoyed a two-hole journey to be second, beaten by about two lengths.

Casey also brought home the first winner of the Plum Peachy filly stake, when the Rodney Freese trainee, Fox Valley Torrid ($7.60), took advantage of a pocket trip and proceeded to drew off to a five length triumph in 1:56. The front-stepping Valar Moghulis held off the late rushing Fox Valley Lolo for runner-up honors.

Still Perched on Top: Wilfong put first leg Plum Peachy victor Perch ($2.40), on the front-end at the three-eighths pole and the Jay Garrels filly went on and coasted to 1:53.3 victory, in the second round of the Night of Champion series, three lengths ahead of Lilly Von Stupp.

The Hosea Williams stable’s Rollin Coal ($9.40), powered past for driver Juan Franco, to capture the $12,000 Open for fillies and mares, her fifth win of the meet. The 1:51.2 mile time was a new lifetime mark for the 4-year-old ICF mare.

Who’ll Be Perched on Top After Tonight? Those Babies Are Back
Scroll to top