Here’s how things unfolded on the final day of racing of the 2022 Springfield meeting.

No Mystery Here: The first ISFCS championship to be contested was the $30,000 two-year-old filly trot event and all eyes were on the unbeaten Curt Grummel trained Marvelous Mystery who was trying to buck the outside nine-post in a 10-horse field.

In the end the outside slot was too much to overcome as Fox Valley Shania ($5.60), from the pole position, was two lengths the best at the wire, snapping Marvelous Mystery’s winning streak at eight in a row.

Driver Kyle Wilfong had Marvelous Mystery in the middle of the pack most of the way and when Fox Valley Shania (Atlee Bender) came out of second on the backside and took command over Dawn Of Creation, the Erv Miller trained steadily put more ground between her and the 3-5 favorite public choice and was eased up at the wire, timed in 1:55.2.

Fox Valley Candor (Kyle Husted), who went off-stride in the early going, made up a ton of ground to be third.

Mississippian Shines: Despite stuck in the second tier and two lengths off the field at the start, driver Cordarius Stewart, a Mississippi native, weaved his way through traffic with Fox Valley Kia to capture the $30,000 freshman filly pace championship in a quick time of 1:51.2, just a fifth of a second off the all-time Illinois record for her gait and class.

The fractions were brisk as first Major Rosita took the field to a 26.3 first quarter and then One R Andis Star grabbed the lead and got to the half in 54.3 as Cordarius did what he could to put the Scott Nance winner in position to contend.

The 2-1 favorite Rona Rae (Todd Warren) sprinted to the front and had the lead in the lane until Fox Valley Kia dug in and zipped past in the late going for Arizona owner Judy Collins, making up 10 lengths in the last half of the mile..

My Daddys Revenge (Casey Leonard) won the photo for second while Rona Rae and The Magical Woman were a close third and fourth, in that order. 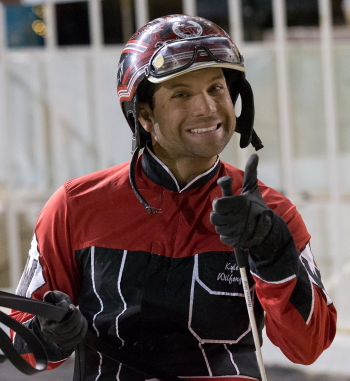 A thumbs-up to Kyle Wilfong, the leading driver at the Illinois State Fair meeting with 14 winners. (Four Footed Fotos)

Heck of a Duel: The $30,000 juvenile championship trot for colts and geldings turned out to be a two-horse race between the betting favorites Nino Man (3-5, Kyle Husted) and Goomster (9-5 Kyle Wilfong) with the latter proving best for owner and trainer Dennis Gardner of West Salem, Illinois.

The pair battled from the backside on with Goomster ($6.00) on the inside and Nino Man on the outside. Goomster put his rival away in the late going to capture his second major ICF stake of the year by about one length in 1:54.2, only two fifths of a second off the track record. The Cassius gelding earlier won Hawthorne’s summer Kadabra championship.

The 30-1 longshot (John D Finn), also owned and trained by Gardner, got up for third.

By a Nose: An exciting slugfest was anticipated in the $30,000 two-year-old colt and gelding pace and no one was disappointed in the battle-royal that took place on the racetrack.

In the end it was unbeaten Fox Valley Jasper (Atlee Bender) surviving a nose decision of his Erv Miller stable-mate Illini Jetset.

The first half (56.4) saw five horses on the front-end at one time or another during the first half mile including Unhynged Speed, Fox Valley Landen, Fox Valley Cayman, Fox Valley Patriot, and Mister Sleaze. Eventually Fox Valley Jasper ($5.60), who is now 6-for-6 in his young career, took over the lead and held on.

Ghost Shark (Travis Seekman) raced big to be third over the even-money favorite fourth place finisher (Fox Valley Langley (Kyle Wilfong) who had too much ground to try and make-up.

A Gritty Victory: Chalk players no doubt were gasping for air when the 1 to 9 overwhelming favorite Funky Wiggle (Kyle Wilfong) went off stride at the start of the $30,000 ISFCS three-year-old filly trot championship.

However, the Curt Grummel, put on the race of her young career, showing plenty of fortitude by coming from last to finish first in the 1:55.2 mile, her fifth consecutive win and Funky Wiggle’s ($2.10) sixth in eight season starts for owner and breeder Dr. Patrick Graham.

Funky Wiggle fell about 11 lengths behind the field at the start but somehow put on a burst of speed to overtake her rivals and get command at the 57.2 half. From there it was a case if she had enough left to fight off the opposition, and she did by a neck.

Making It Look Easy: The 3-5 favorite Lousdobb (Casey Leonard) showed he’s back in the groove with a convincing three length victory over her three-year-old male trotting rivals in the $30,000 SISFS championship.

Nicely rated by Casey Leonard, Lousdobb cut first half fractions of 28.1 and 29.4. A 29.2 third panel put some daylight between the Lou’s Legacy gelding and the stalking Fox Valley Cairo (Kyle Wilfong) and a 26.4 last quarter saw the Steve Searle trainee pull away for Illinois owners Flacco Family Farms (Alexis) and All-Wright Racing of Morton. 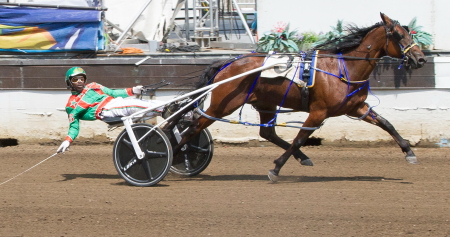 Sent off at 5-1 odds, Buford hustled out the Fort Knox filly from the five slot and into the lead. After a 56.3 half, she was challenged by Stardust Gram (Kyle Husted), pinning the favorite Apple Valley (Travis Seekman) in third on the rail.

Seekman got Apple Valley out in the last turn and his filly had dead aim on Rollnroz ($13.00) but the Trigg trainee had plenty left (26.1last quarter) and was a comfortable two length winner for owners Eric and Rosalind James of Magee, Mississippi. Apple Valley settled for second and Stardust Gram took third.

A Bridesmaid No More: The finale was the $30,000 Championship for sophomore pacing colt and gelding pacers

Fox Valley Ozzy, the 2-1 second choice in the wagering, knocked off the 3 to 5 favorite Get E Up (Kyle Husted) with the help of a heady drive by Casey Leonard in the $30,000 ISFCS three-year-old male pacing championship.

The Gary Rath trained winner had finished second in his last three starts against fellow state-breds but on this afternoon he was the best in the 1:52.4 mile for Marengo, Illinois owners Steve Mc MacKin and David Lee Samuelson.

Get E Up had to take the runner-up role this time with Kingofmyheart (Atlee Bender) taking third.

Fox Valley Ozzy came out of the two-hole at the three-eights and took command from Kingofmyheart. A modest 29.3 second quarter 30.4 third panel gave the World Of Rocknroll gelding his breathers. A 26.3 last panel saw “Ozzy” pull away.

Hail the Champs: The leading driver at the Illinois State Fair was Kyle Wilfong with 14 winners. When Rollnroz took her ISFCS championship, it gave trainer Roshun Trigg his seventh winner, putting him in a tie with fellow Mississippi native Jamaica Patton for top trainer honors.