“Times change and we change with them.”

This old phrase pretty much describes why Hawthorne this year has announced it’ll have no series legs that lead up to a Night of Champions final and instead will go with eliminations and then a championship, the format of the old Super Nights held at Balmoral and Sportsman’s Parks.

Only Hawthorne we’ll have two ICF championship nights this summer. One in July with a guaranteed $50,000 final on each two-year-old final and an estimated $100,000 for state-bred freshman championships in September.

The reason, well it all came about after when Arlington Park threw a wrench (or I like to call it, a hand grenade)

into the future of Illinois horse racing by dumping the thoroughbreds starting with this season.

That dubious decision left Hawthorne as the only Illinois facility for both the thoroughbreds and the Standardbreds. A schedule for 2022 was worked out and it procured both breeds racing dates on the Cicero, Illinois mile track with split seasons and a warm weather session for each.

The split meets that were carved out are fair for both breeds but not what either breed needed to produce the most revenue for its horsemen and the State of Illinois.

The Hawthorne harness meeting usually went from a five-month span that encompassed May through most of September, to a winter meet and a summer session that doesn’t open until June 30th and ends in mid-September

Simply, there isn’t enough weekends days of racing this year to have four freshman series legs, three-year-old series legs, plus Springfield and Du Quoin, hence a return to the format of the 1990s and early decades of the 2000’s.

I do have one major quandary with the Night of Champions information on the Hawthorne website:

When is the July championship?

The site (www.hawthorneracecurse.com) says the final will be raced in July. That’s a long month. Is it early July, mid-July, or late July? If you’re getting a youngster prepared for this major stake, the date is obviously essential to know.

Since the Illinois Department of Agriculture’s Cardinal and Violets are scheduled for June 30th, the first night of racing for the summer meet, I’ll cross off Saturday, July 1st for a “go.”

My guess is the eliminations and finals will be contested late in the month, most likely the last two weekends. 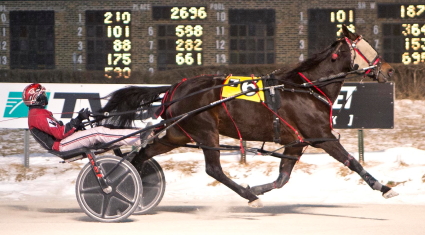 Short but Sweet: Both Opens for trotters and for filly and mare pacers are on Saturday’s eight race card. They’ll go as races two and three with $13,7000 pots on the line. While small on numbers, each Open looks to be a very competitive affair.

The Nicole Agosti Stable’s It’s Time For Fun (Kyle Wilfong) has her sights set on a second consecutive victory in the Open distaff co-feature, and her third win in her last three starts. The seven-year-old homebred drew well with the four slot in the six horse field.

Awaiting her will be Scorecard Dandy (Mike Oosting), My Uptown Girl (Travsi Seekman), Fox Valley Exploit (Kyle Husted) who was only a head short a week ago, along with Rollin Coal (Juan Franco) and earlier Open winner Seventimesacharm (John De Long).