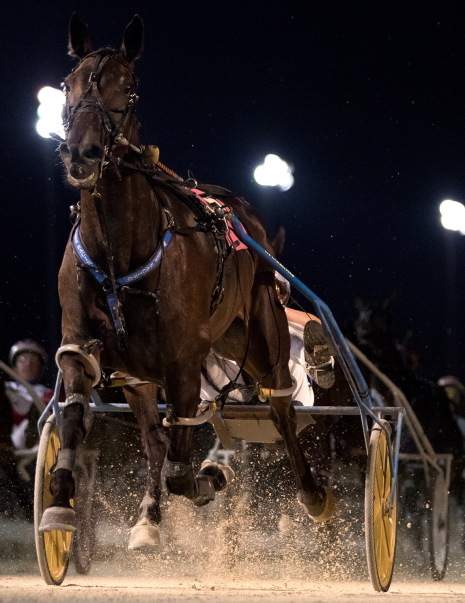 Bucklegirl Bobette, the reigning queen of Hawthorne Race Couse, is back in town to head up Saturday night’s Open Pace feature for fillies and mares and she’ll find some fresh faces going to the gate to try and knock her off her throne.

Shipping in from Hoosier Park are Dee Rocks (Jamaica Patton) and Imajean Rocks (Ridge Warren). Both Indiana bred mares have 1:51 and change victories this year and are threats to end Bucklegirl Bobette’s winning streak at Hawthorne at five in a row.

Both Indiana invaders have raced successful at Hawthorne in the past.

Dee Rocks, from the stable of trainer Dossie Minor, started her career last summer at Hawthorne and rattled off three consecutive victories before heading to Indiana for its sire stakes. The Rockin Image filly went on to win eight more times as a freshman at Hoosier Park, including a trio of $80,000 Indiana Sire Stakes Finals.

Dee Rocks banked over $196,000 for her Illinois owners and breeders Ron Philips (Athens) and John Carver (Rockland Island) as a freshman. She had both a six race and a five race winning streaks in her first season.

Dee Rocks was assigned one one-slot by the Race Office tonight while Bucklegirl Bobette was allocated the outside eight-slot. Posts two through seven were drawn with Imajean Rocks (Ridge Warren) getting the six in her Hawthorne return for trainer Terry Leonard who also sends out Char N Marg (Casey Leonard) from the two.

You might remember Imajean Rocks from Hawthorne’s winter meeting. The five-year-old mare won back-to-back conditioned events in January and then picked up a fourth and a fifth place check in a pair of Opens. Another daughter of Rockin Image, Imajean Rocks has earned over $32,000 this year for her Indiana owners.

Bucklegirl Bobette needed a quick 26.2 first quarter to get command and still came home in 26.3 when she was nipped at the wire. Earlier this summer the Duneside Perch mare rattled off consecutive Hawthorne victories in 1:50.3.

Casey on a Roll: Ponda’s Prospect ($3.40) snapped a seven race losing streak with a front-stepping victory in last night’s $10,000 Open Pace before the rains came..

Casey Leonard put the 4-year-old gelding on top right from the start and the Terry Leonard trainee cruised to a 2 and 1/2 length victory over runner-up Terror of The Nite (Kyle Husted).

Only four horses were on the gate at the start of the Open after Hot Rod Dylan was scratched sick and Kelly D made repeated breaks before the start and ended up being pulled up.

Ponda’s Prospect took the small field to a 28 first panel and a 55.4 first half before Dakota Roadster (Cliff Bell) came out of the third and was beside the winner at the three quarters. However Ponda’s Prospect had plenty left and pulled away to win in 1:51 flat for owners Joe Putnam (Pendleton, IN), Novi Trot LLC (Glen Ellyn, IL) and Michael Lee (Marshall, MI).

Casey drove the winners of four of Friday’s first six races on the card.