Homepage
You are here: Home1 / Mike Paradise2 / Night of Champions Keeps Getting Better 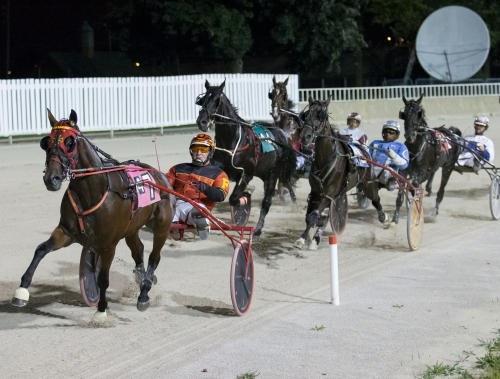 Trixie’s Turbo (J D Finn) takes a field through the last turn on his way to a victory in last weekend’s round three of the Kadabra stake series. The ICF 2-year-old colt trotter goes postward in Saturday’s fourth leg of the Kadabra. (Four Footed Fotos)

Hawthorne’s Night of Champions, a week from Saturday, got a boost both on and off the racetrack when management announced that a pair of $25,000 open company Invitational events will be added to the card, plus several of the crème de la crème of past Chicago circuit drivers will be available to welcome on-track patrons.

The bringing together of many of the most notable and popular horsemen to drive in Illinois will make an already special night of racing even more memorable. The prodigious past driver colony will be accessible to meet and greet patrons and sign autographs on the first floor of the Grandstand on Hawthorne’s September 22nd gala evening.

The two $25,000 Invites on the Night of Championships, one for pacers and the other for trotters, will see an estimated $1.15 million in purses dished out on the 13-race card. 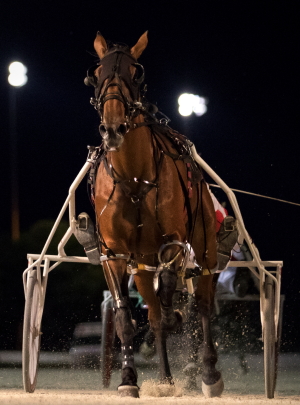 NOC Purses Announced: Hawthorne Race Secretary Robin Schadt has posted the conditioned sheets for the remaining nights of racing at the summer meet, including the expected purse finals on the Night of Champions:

And There’s More: A trio of $45,000 championships for ICF pacers and trotters, ages three and up, also are on tap—the Robert Molaro for male pacers, the Tony Maurello for filly and mare pacers, and the Plesac for Illinois bred trotters of either sex.

Coming up Friday and Saturday are $15,000 elimination races, if necessary, for the ICF aged paces and trot. A $500 entry fee is required. If eliminations aren’t needed in any of those events, a prep race will be offered in its place.

Last Chance: The fourth and final legs of the 2 and 3-year-old Night of Champions series will be raced this weekend, We’ll have more about those stake events in Friday’s and Saturday’s stories.