Homepage
You are here: Home1 / Mike Paradise2 / No Battle of the Sexes This Time Around

By Mike Paradise
A pair of $10,000 Open Paces, one for the boys and another for the gals, head-up Sunday’s card at Hawthorne and that’s a good thing, especially for a couple of mares who are back this weekend to compete where they belong.
A week ago both Seeyouatthefinish and Feetonthedashboard were asked to move out of a distaff Open that didn’t fill into an Open against colts and geldings where they not surprisingly didn’t fare very well.
Seeyouatthefinish managed a fourth place check. Feetonthedashboard vanned in from Indiana and got zip for the Dale Hiteman Stable. Both are nice mares but there’s a reason you almost never see high-level males and female pacers competing against each other.
Tonight Feetonthedashboard leaves from the six slot and Seeyouathefinish the seven. The outside eight post belongs to the 3-year-old Illinois bred filly Whiskersonkittens. She was given a perfect two-hole trip by her driver Todd Warren and pulled off an upset at 8-1 odds. 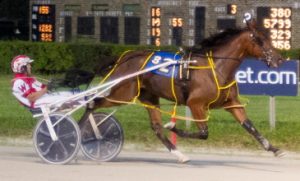 Whiskeronkittens (Todd Warren), only a 3-year-old,, was assigned the outside post in tonight’s Filly and Mare Open Pace. (Four Footed Photo)

For doing so the Hawthorne Race Office rewarded her for that win with the outside slot this week. Never mind the fact the Kim Roth trained 3-year-old filly had previously lost to the two older gals inside of her the only times they met in July Opens.
Interestingly the 2-1 program favorite isn’t any of the three above mention distaffers. It’s Ryleigh’s Lilly who gets to start in the middle of the pack (pp 5) with driver Casey Leonard
The other four challengers are longshots Gran Gabriel (Sam Widger), The Real Tone (Ridge Warren), May Caliente (Matt Krueger) and Town Temptress (Kyle Wilfong) who all drew for the four inside posts.
The fifth race Open Pace for colts and geldings is a bit of a head-scratcher as far as drawn and assigned posts are concerned as well.
Lucky Crusader (Kyle Husted) was a game winner last week when he beat two mares and four geldings in the Open at 14-1 odds. The 7-year-old Alex Adam trainee had raced only once this year in a Hawthorne Open and finished eighth but last week’s surprise victory sent the 7-year-old gelding to the back of the line for this week’s start.
Evidently Hawthorne’s often questionable morning line doesn’t see things the same as its Race Office. The track’s computer generated USTA newest bauble lists Lucky Crusader at 7-1 and grades just one horse in the field at higher odds.
It has Mystical Walter (pp 5, Casey Leonard) as the 5-2 favorite, followed by three-time Hawthorne Open winner Mr. Coolie (pp 4, Sam Widger) and Sunset Dreamer (pp 5, Kyle Wilfong) at both 7-2 odds.
The fifth race field is rounded out with Yankee Bounty (9-2, Dale Hiteman), Fort Silky (7-1, Ridge Warren), and Victor Bayama (30-1, James Lackey).
http://harnessillinois.com/wp-content/uploads/2021/03/ihha_logo_white_wtext_v2-300x130.png 0 0 Mike Paradise http://harnessillinois.com/wp-content/uploads/2021/03/ihha_logo_white_wtext_v2-300x130.png Mike Paradise2016-08-21 12:36:112016-08-21 12:36:11No Battle of the Sexes This Time Around