It was “Racing Under the Lights” as the two-day harness racing meet at the Du Quoin State Fair got under way Friday night.

Instead of sunny skies and temperatures in the mid-90’s at the southern Illinois facility, the 13-race card on the “Magic Mile” was conducted in pleasant 80-degree weather and if horses could talk, they probably all would like to say “thanks for the nighttime start.

All the major ICF stakes came in the first half of the program and he’s how things unfolded.

Talk About Breezing: The $28,000 Windy Skeeter trot for three-year-old fillies was the first of six consecutive ICF championships on the program and it turned out not to be much of a contest. 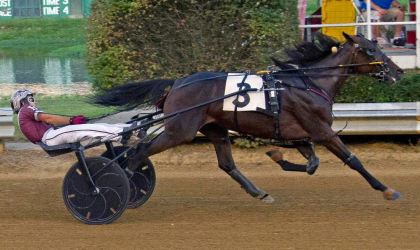 The Erv Miller stable’s Breeze At Sunset, confidently handled by Atlee Bender was much the best, drawing off by more than eight lengths in a time of 1:57.2 as the heavy 1-2 favorite.

Her main rival Loulita (Casey Leonard) did rally for second, but she never was much of a threat to win it after lagging the gate and falling far behind right from the get-go.

The victory gave Breeze At Sunset a sweep of the Illinois State Fair championships and her sixth triumph in her last seven starts for Bowie Racing LLC (Douglass Overheiser), of Shorewood, Illinois.

He’s Back! Atlee Bender was back to greet the track photographer with another of his father-in-law Erv Miller trained fillies. This time it was the two-year-old pacer Lady Bombay, a front-stepping winner of the first $16,500 division of the Director’s Award stake.

By the time Rollinroz got rolling in the stretch, Lady Bombay still had plenty left and handily held her off by about two lengths in 1:56 flat, a new career mark for the Major Bombay sibling, also owned by Douglass Overheiser of Shorewood, Illinois.

Nosing Her Foe Out: The second Director’s Award division was a heck of a horse race with the two-favorites Fox Valley Captiva (4-5, Atlee Bender) and Dandy’s MNM (Kyle Husted) side-by-side for the last quarter of the mile. 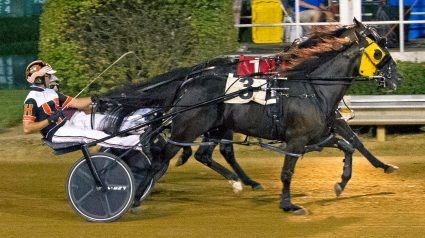 The nose decision went to the Marv Chupp trained Dandy’s MNM, the 8-5 second choice, in 1:56, another new lifetime mark for the Fort Knox filly owned by A Piece of the Action LLC of Culver City, California.

Not So Easy Does It: Springfield three-year-old filly pace champion Scorecard Dandy was scratched because of an injury a few races before the field went to the gate for the $28,00 Time Dancer stake and that left the door wide open for two-time Plum Peachy stake series winner to nail down her fifth victory of the year and she did just that for trainer Mike Brink.. . . but it wasn’t easy.

Hart’s Heart was shuffled back to fourth (and last) on the backside and needed a game last quarter of a mile to overtake the pace setting Bootsy Bombay (Kyle Husted) by one and one-half lengths at the end of the 1:55.4 mile.

Nicely Driven: A patience drive from Kyle Wilfong paid off for the 1-5 favorite Funky Wiggle in the $33,000 Shawnee stake for ICF freshman filly trotters.

Wilfong sent Funky Wiggle out from the start and grabbed the two-hole behind the Hot Trotn Trixie (Archie Buford) who coasted to a 59.2 half. She was then challenged by Armbro Lark (Charles Arthur) and as these two fillies battled, Wilfong bided his time with his  Curt Grummel trained filly.

In the lane Funky Wiggles worn down the leaders, winning by more than one length in 1:57.1. The daughter of Lou’s Legacy also captured the Illinois State Fair Championship at Springfield eight days earlier for owner and breeder Dr. Patrick Graham. 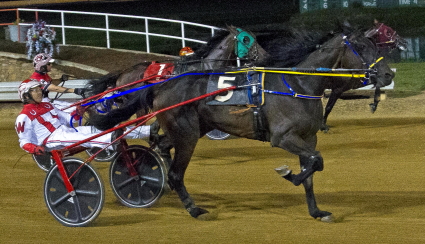 Sumbodygetdisfool (Todd Warren) is shown as he is about to get past Coco D’Lascito and win the $28,000 Pronto Don for three-year-old ICF male trotters. (Four Footed Fotos)

He’s No Fool: The $28,000 Pronto Don trotting stake saw Sumbodygetdisfool put on a furious stretch rally and again defeat the 3-5 favorite Coco D;Lascito (JD Finn), just as he did a little more than week ago in the Springfield showdown for state-bred  three-year-old colts and geldings.

Coco D’Lascoto had things his own way on the front end with leisurely fractions of 29.1 and 59 with Somebodygetdisfool in fourth, some five lengths behind but the Armbro Approach winning gelding was saving his best for the last quarter of the mile and got up in time once again.

As Expected: Earlier in non-wagering events Annas Lucky Star (Kyle Wilfong) was much the best in the $7,000 Aged Trot for ICF fillies and mares in 1:55.4 and Talk About Valor (Travis Seekman) also was a comfortable front-end winner in the horse and gelding division with a 1:54.1 clocking.

The first of a pair of $7,000 aged pace showdowns are next with the two inside horses, He Gone Jack (pp 1, Ridge Warren) and Backstreet Lawyer (pp 2, Kyle Wilfong), the pre-race choices in the horse and gelding division.

The fifth race aged filly and mare division looks like a good one with Springfield’s one-two horses at the finish wire Fox Valley Exploit (pp 4, Kyle Husted) and My Uptowne Girl (pp 2, Ridge Warren) squaring off again with another state-fair title on the line.

In between the aged pace battles is the $33,000 Darn Safe championship for juvenile male trotters.

The Mike Brink stable’s Springfield winner Fox Valley Cairo (pp 1, Ridge Warren) will seek to make it three victories ion a row. The Cassius gelding will be confronted by five sons of the stallion Lou’s Legacy along with another Cassis offspring Hot To Trot Sparky (Archie Buford), a Kadabra leg runner-up who can be quick from the starting gate.