Homepage
You are here: Home1 / Mike Paradise2 / No Open and Shut Friday Feature

The always popular Open Pace returns to Hawthorne Friday but this time with some very meaningful changes in its field.

The 2020 Illinois Harness Horse of the Year He’zzz A Wise Sky won’t be defending is Open crown Friday night, instead the four-year-old speedball is taking some time off, and deservingly so after competing five straight weekends at a high level.

The ICF star pacer had a big effort a week ago against the best aged pacers at Hoosier Park with a $22,000 pot on the line.

The Triple ZZZ Stable owned pacer was a close second last Friday in Indiana while being clocked in 1:49.3 on a “sloppy” racing strip after the John Filomeno trainee was pushed to a sizzling 53.3 first half.

A few weeks earlier the gifted state-bred pacer won a $51,000 Invite at Hoosier Park in 1:49.1 and he did it parked out the first half (53.3) from the eight-hole in a field with two trailers. 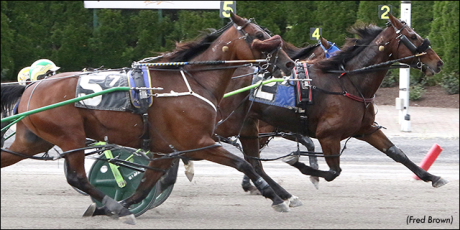 Here’s the Erv Miller Stable’s Braeview Rondi A winning his U.S. debut in a Tioga Downs Open with a 1:49.3 clocking. Tonight, the Australian bred gelding makes his first start at Hawthorne in the fifth race Open Pace feature with Atlee Bender at his lines. (Fred Brown Photo)

It’s a “lock” that we’ll He’zzz A Wise Sky return to Hawthorne before the meet ends. In just three weeks it’s the $45,000 (estimate) Robert S. Molero Night of Champion stake for aged ICF pacers and its $12,000 prep or eliminations will be raced a week earlier.

Owned by Jim Ballinger of Atwater, Illinois, the six-year-old ICF star pacer was assigned the outside seven-slot tonight and will open as the warranted  9-5 favorite since most of the gelding’s 41 career victories have come on Hawthorne’s mile track.

Even with He’zzz A Wise Sky’s absence the fifth race Friday feature is no “slam-dunk” for Fox Valley Gemini. Both No. 4 and No. 6 Bobcat Bay own summer victories in Hawthorne Opens over the pride of the Leonard stable.

And then there’s the Australian bred Braeview Bondi A (pp 5, Atlee Bender) making his Hawthorne debut.

“He” is a seven-year-old Somebeachsomewhere gelding purchased in early March by Bowie Racing LLC (Douglass Overhiser) of Shorewood, Illinois after making over $142,000 in four racing seasons, a lot of dough for a pacer racing “Down Under.”

(It only took a little bit of research on the internet for your author to find a video tape of Braeview Bondi winning impressively in a Western Australia event where he went from last to first in the latter the portion of the race and did so with a huge five-wide without cover move, circling at least 10 other horses). https://www.facebook.com/watch/?v=353194449338541

In Braeview Bondi’s U.S debut under the care of trainer Erv Miller, the good-looking gelding sped to a 1:49.3 win in a $9,000 Tioga Downs Open to earn a trip to the “greener” facilities of Pennsylvania’s Pocono Downs and New York’s Younker’s Raceway.

After joining the Midwest Division of the Erv Miller Stable, the horse was sent to Hoosier Park where he was second (clocked in 1:48.3) and third in a pair of Open 2 events, followed by fifth place finish in last week’s Open 1 headliner.

Interestingly, in that race the “Aussie” pacer was only beaten two lengths by He’zzz A Wise Sky despite not having any racing room in the stretch and had to be taken off the inside lane to the outside path by driver Mike Oosting in the last sixteenth of the mile.

The first four posts will be manned by Commentariat (Travis Seekman), Fox Valley Ren (Juan Franco) and On Duty (Todd Warren), in that order.