Homepage
You are here: Home1 / Mike Paradise2 / No Open, No Problem 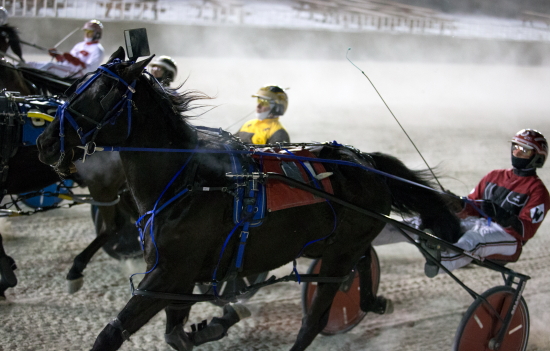 With the Open Pace failing to draw sufficient entries to be carded, this Saturday’s headliner is the fifth race conditioned pace with a $7,500 purse.

It’s basically for horses without $4,000 in purse earnings in their last four starts but there’s a trio of other conditions attached that enabled the race to have a nine horse field.

Don’t be misled by the race’s conditions or its purse, there are some very good horses that will be going postward. Of its nine starters, only three haven’t raced in a Hawthorne Open this season or last, and one of those, Rock Steady Ron (Ridge Warren), took a mark of 1:50 flat last year at Hoosier Park.

Salvatore (Brandon Bates) and Youmakemyheartsing (Kyle Wilfong) are the two others not to compete yet in a local Open.

The five-year-old ICF pacer Salvatore dropped a nose decision in his first start after being claimed by trainer Eugene Gillman for $7,000. The Feb. 22 loss came in a conditioned pace with a higher purse ($9,200) than Saturday’s but the competition in that race wasn’t as tough as tonight’s, so what seems like a class drop, really isn’t.

However Salvatore has looked sharp, loves Hawthorne’s stretch and has a hot driver who may be able to flush out live cover.

A Bettor’s Risk, from the barn of trainer Payton Ode, figures to get the most play from the betting public. The now seven-year-old gelding was raced inside in a needed start and did pace a 27 flat last quarter. The horse has had past success at Hawthorne and boasts a 1:48.3 winning mile in 2018 at Hoosier.

“The horse was off for a couple of months,” said Payton Ode, the trainer of A Bettors Risk, “so he needed his race. The winner (Castle Flight) was cutting some fast fractions and was awfully tough last week.”

“My horse’s start should help him for this Saturday’s race. He likes Hawthorne and its long stretch. He likes to run horses down. While we will be going back to Indiana I’ll pick my spots to race him at Hawthorne. The competition at Hoosier is very tough,”

Open Bound: After a week’s absence, the $12,000 Filly and Mare Open returns tomorrow night. (I’ll have more that race in Sunday’s column.) Meanwhile we do have a mare racing tonight who will likely work her way back into a distaff Open in the near future and that would be Sweetshadyshark.

I made the Ronnie Roberts trained mare the 4 to 5 favorite in my tenth race line. Sweetshadyshark is in a low-end conditioned race and her third place finish last week was her first outing since last September.

Sweetshadyshark took part in 12 consecutive Opens last summer at Hawthorne and came away with a pair of victories, two seconds and a trio of thirds. In 2018 she went two-for-four in Hawthorne Opens with a second place finish.

Ex-Super Night Champ Back: Also making his 2020 debut tonight is the former Super Night champion Dinky Dune, owned and trained by Dana May of Newton, Illinois. The now seven-year-old ICF pacer won the $112,000 Pete Langley 3-Year-Old Championship at Balmoral in 2015 and also annexed the Cardinal (Balmoral) and Dudley Hanover (Du Quoin) that year.

So Far So Good for Bates Pretty Image, the Mare to Beat
Scroll to top