Homepage
You are here: Home1 / Mike Paradise2 / No Sure Things in Gals Late Closers

The decision to start off Hawthorne’s summer meeting with over a dozen Late Closer Series has proven to a wise one, not only for the racetrack and its mutuel-handle, but also for horsemen and their owners along with for the betting public.

A heavy dose of series nominations have enable the series finals to go foe some decent purse money and guarantee 2 to 3 consecutive weeks of starts for series horses. The fans want competitive races and tonight’s five Late Closers for fillies and mare pacers will give Chicago circuit players just that.

Trying to pick a winner is no easy task. Heck, in most of Friday’s series for the gals, coming up with the post-time favorite can be an arduous undertaking.

In tonight’s opener, the $12,800 Late Closer (No. 10) for ICF fillies with without two wins as of April 1, Bucklegirl Bobette (Casey Leonard) and Likeafireballshot (Jared Finn) after traded wins the past two weeks. Both drew well, with posts 2 and 3, respectively. 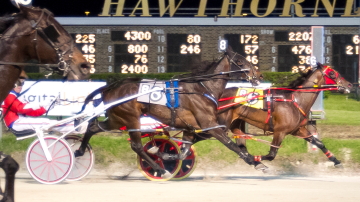 (No. 6 Likeafireballshot for the best of Bucklegirl Bobette (No. 8 last week. Picture courtesy of Four Footed Photo)

Gary Rath’s Burry Me Inthesand comes off a huge try from the 10-hole after a needed start and may offer fair wagering value.

The $13,000 Late Closer (No. 11)for open company NW of 2 brings out a completive third race 10-horse field headed up by Rocknroll Hoochcoo (Pat Curtin), a neck short last week of two series legs wins, Jiggles The Clown (Casey Leonard) who romped last week, Sugar Crush (Ridge Warren), who has dropped two photos, and Little Miss Torie (Tim Curtin)who popped at 27-1 a week ago in her second start of the year.

Then there’s the fifth race $14,800 Late Closer (No. 15) for distaffers there didn’t earn $1,000 per start in 2015-16. Joyful Game (Matt Krueger) won the first leg at 7-1 but could do no better than fourth last week. Sure You Are rallied at 156-1 in the second leg with a heady drive from Casey Leonard. Lil Miss Knuckles (Todd Warren) raced well in both series losses while Young American (Frank Petrelli) raced sharply improved last week.

Fox Valley Charm out on a dazzling come-from-behind performance last week with Matt Krueger at her lines for the first time, coming from last going into the final turn to uncork a winning 26.1 final panel.

Seeyouatthefinish (Kyle Husted), a winner at 23-1 in round one, lacked racing room in that race and ended up third. Feetonthedashboard has been getting good plat at the betting windows and comes off a valiant effort. Tonight will be the first time at the meet she starts from an inside post (No. 3). Town Temptress comes off a second place finish and it was her first outing since October.

The ninth race $13,400 Late Closer (No. 13) for NW of 4 distaffers has Charles Adam’s Duneside Perttie going for a series sweep. The Alex Adam trainee got her nose in front last week despite a grueling first over journey.

Dandy’s Diva paced 27 flat last quarter in her first leg win but a hard first half saw her weaken to fourth at 20 cents on the dollar last Friday. Faithful Friend (Frank Petrelli) would have been a close third last week if she hasn’t got locked-in and shuffled back before finding racing room, Tamarac Smoochie (Casey Leonard) was nosed out of a win by Duneside Perttie.

Overdue Cowboy Pops:  After going winless in his first 19 career starts the 3-year-old All About Cowboys picked a good time make his first trip to the winner’s circle, coming from far out of it for driver Matt Krueger and collaring the heavy 2-5 favorite Skyway Jaylo in the final yards of the $12,800 Late Closer Series (No. 18) for trotters. 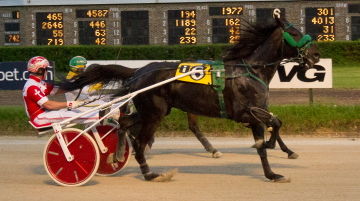 (This Four Footed Photo cauht No. 6 All About Cowboys getting past the 2 to 5 favorite Skyway Jaylo)

Kruger was contend to take the Gregory Kain trained gelding back at the start and raced All About Cowboys in sixth while Skyway Jaylo made the top, sped to a 57 first half and heading for home looked to be in great shape for a series sweep.

However Kruger sent All About Cowboys ($17.00) three-deep in the final turn, around a tiring Love Child, setting their sights on Skyway Jaylo and passing the mare in the final strides to pull off a neck upset for Illinois owners Green Acres (Beecher) and Mike Klimas (Oak Lawn) with a 1:56.1 clocking.

Later on the card Mr. Strata (Kyle Wilfong) held off Awfully Emotional (Pat Curtin) to capture the $15,400 Late Closer (No. 17) Trotting Final by a neck in 1:58 flat for trainer Nelson Willis and paid a surprising $17,00

The even-money favorite Powerful Princess went off stride before the start. She fell far back but still got up for third, beaten choice one length.

The $13,200 Late Closer Series (No. 6) for $5,000 claimers saw Travis Seekman give the Ken Rucker Stable’s Winning Dream a perfect winning trip. The 8-year-old gelding’s time of 1:53.2 knocking more than three seconds off his lifetime mark.