Homepage
You are here: Home1 / Mike Paradise2 / No Sure Things in ICF Trotting Stakes

Last season’s ICF freshmen trotting division for colts and geldings saw a trio of youngsters knock each other off when the major state-bred stakes came around and we can expect more of the same during their 3-year-old campaigns.

The Mike Brink Stable’s Illinimight finished his first season by capturing the $115,000 Kadabra Final on the Night of Champions and ended his freshman term with over $84,000 in purse earnings for Arthur, Illinois owner Bill Wright. 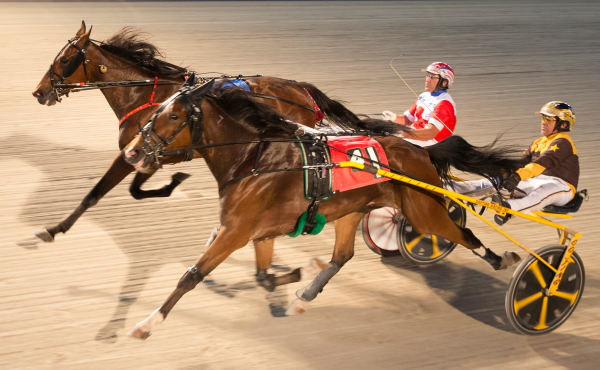 Maui Mama (Casey Leonard, outside) and White Pants Fever (Mike Oosting, inside) were just a nose apart at the end of their Beulah Dygert stake series confrontation a week ago. (Four Footed Fotos)

Tonight Illinimight will have to buck the outside six-slot in the second race first $23,100 Cardinal trot division while Kadabra runner-up Cruzen Cassi (Jared Finn) secured the pole position for trainer Heather Stell and the Curt Grummel’s Stable’s Big Lou (Tim Curtin) drew the four-slot after popping at 28-1 odds last week in a division of the Erwin F. Dygert Memorial stake series.

The second Cardinal trot division is the anticipated match-up of multi-freshman stake champions True Detective and Vic’s Pizza meeting for the first time as sophomores. Between them the pair won 9 races in their combined 19 freshman starts and traded major stakes victories.

True Detective bested Vic’s Pizza in the Cardinal and won 3 of the 4 Kadabra stake seri4es legs however he went off stride in the championship. The Curt Grummel trainee also made a break in his Springfield elimination and missed that State Fair championship and broke again in the Darn Safe at Du Quoin. True Detective ended up with $37,165 banked for owner Dr. Patrick Graham of Pittsfield, Illinois.

Meanwhile Vic’s Pizza got on a roll last August and notched both the Springfield and Du Quoin State Fair Finals and looked like a major contender for the Kadabra final but never made it to the championship.

The talented gelding didn’t make the gate in his September 9 Kadabra series start and later it was discovered he had broken a sesamoid bone, ending his 2-year-old campaign with a record of 4 wins and two seconds in 8 starts and $53,455 on his card.

Brink provided Vic’s Pizza all the time off he needed to mend the sesamoid problem and gave the trotter two qualifiers preparing for his Cardinal start. Vic’s Pizza won his May 8 Springfield qualifier in 2:00.4 but broke at the start 9 days later however he made up about 20 lengths to finish second. 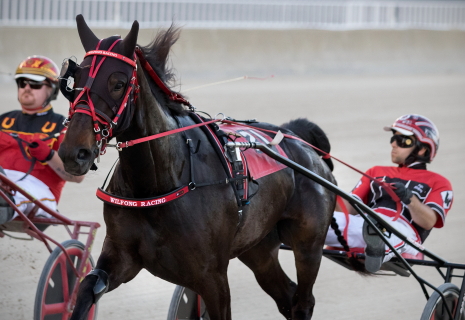 Good Design was tops in the freshmen filly division last year with over $94,000 earned and her Fox Valley Flans Championship conquest was among her five season victories. Trotting Grace was second best in the “Flan” finale.

It was Maui Mama’s first start as a 3-year-old for trainer Mike Brink who certainly had her ready in her 2018 debut. The Cassis filly is now won 8 of 10 lifetime starts and is closing in on $90,000 on her card for owner Bill Wright. She’s listed at even-money in the Hawthorne program.

White Pants Fever made a break before the gate in last week’s start, recovered nicely and brushed to the lead at the 58.3 half only to end up a nose short at the wire for trainer Steve Searle. The filly a week earlier took the Bea Farber series final with a career fastest 1:56 flat mile. 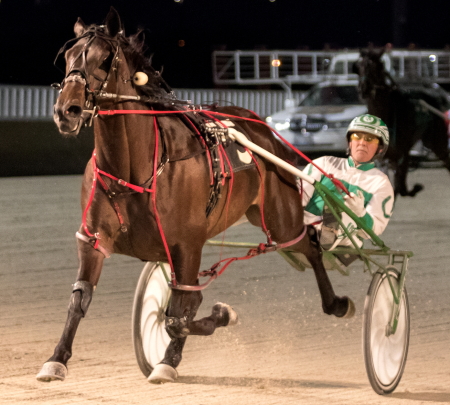 The 1 to 2 favorite Rollin Coal (Casey Leonard) started running on the lead on the backside in the fifth race first Violet split and that made the task much easier for Allbeastnobeauty ($5.00) to breeze to her third consecutive win for the Mike Brink Stable.

The second place filly The Sis Master (Michele Morgan) was seven lengths behind Allbeastnobeauty at the end of the 1:54.4 mile. Rollin Coal came a long way to be third but was disqualified to sixth by the steward.

A few races later in the second Violet split Fox Valley Jazzy (Ridge Warren) enjoyed a pocket trip behind The New Americana (Matt Kruger) before surging past in the lane for trainer Dale Kanitz and prevailing by 1 and 1/2 lengths in 1:54.2.

JB’s Shooting Star (Casey Leonard finished strong to be second behind the Cathy Finn-Kanitz owned winner while The New Americana settled for third.