Homepage
You are here: Home1 / Mike Paradise2 / No Waiting Around for Saturday’s Feature

You won’t have to wait long to see Saturday’s feature race at Hawthorne. In fact, if you arrive much past 7 o’clock you’ll probably miss it.

Making her first start at Hawthorne since the winter meet of 2016 is the 7-year-old mare Mystical Nectar (pp 1, 8-5) who now races out of barn of Payton Ode. Kurt Sugg is scheduled to come in from Northfield Park to drive the likely post-time favorite.

Mystical Nectar hit the board in both her 2016 at Hawthorne and each came in the top level Opens. Her $143,000-plus career bankroll is tops in tonight’s field for Michigan owner Greg Gardner.

The George Anthrop’s Savannah Georgia, another Michigan owned mare (Tomas Enterprises of Battle Creek) comes to town in tip-top shape with back-to-back front-end wins at Saratoga. In fact she’s gone wire-to-wire in 5 of her last 6 starts,

Currently trained by Ross Leonard, Rocking Kate has been hurt by outside posts in her last couple of Ohio outings and should benefit from a middle-slot (the four) and the switch to a bigger track. Casey Leonard drives her for the first time tonight. 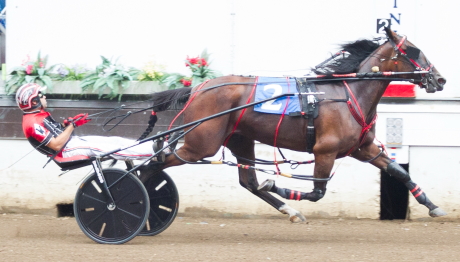 Boogie On Down was one of the top ICF 3-year-olds last season, banking over $64,000 for the Wilfong family. The home-bred daughter of Skydancer Hanover chalked up five wins in 2018 including the $50,000 Springfield Championship and a leg of Hawthorne’s Plum Peachy stake series.

Backwoods Barbie spent much of last summer at Hawthorne and loved its long stretch. The Lisa Mara mare packs a big late wallop and concluded her 6-year-old campaign racing in $12,500 and $15,000 claimers at Hoosier Park with three consecutive victories, the last in mid-November for trainer Jim Molitor of Oak Lawn, IL an co-owner Dave Falzone of Chicago,

Frosty First Friday: It was a frigid opening night at Hawthorne with the temperature in the single digits and a wind chill factor of minus eight below zero when the featured fourth face Open III Pace went off.

With both of the Tom Simmons Stable’s classy horses Somestarsomewhere and Aimo Hanover weather related scratches the field was reduced to six starters.

The veteran pacer Best Man Hanover (Todd Warren) pulled off a surprisingly easy win at 10-1 odds, drawing off by four lengths at the end of the 1:55.4 mile with a 27.1 last panel.

The betting public hammered down the Cal Expo invader Firedrake (Kyle Wilfong) to1 to2 odds and he got a perfect pocket trip behind the pacesetting Soap Stars (Keith Crawford) who took the field to a :58.4 half with the now 10-year-old Best Man Hanover racing inside in third.

Firedrake was pulled out in the last turn and wore sown Soap Suds but was no match for Best Man Hanover ($23.40) who didn’t seem to mind the bone-chilling weather at all as he stormed past in mid-stretch and was well in hand at the wire.
The victory was the 42nd in Best Man Hanover’s racing career, all for Lemont, Illinois owner Sawgrass Farms and trainer Perry Smith. Firedrake was second best while Soap Suns held on for third.