When the 2019 Night of Champions victor Fox Valley Halsey does make her first Hawthorne start of the year, she’ll be doing so out of a new barn.

Fox Valley Halsey’s triumph in the $100,000 Plum Peachy 3-year-old filly pace final was her last race under the care of trainer Nelson Willis. The filly was sold a month later to the Illinois trio of OB Stables (Sherwood), Dandy Farms Racing (Glenview) and FT Racing Stable (Glenview) and will be to compete for the stable of trainer Terry Leonard.

After her purchase Fox Valley Halsey was sent to Pompano Park last November and made a half-dozen starts before the end of the year for conditioner Rob Rittof, picking up a victory in one of her December races at the Florida racetrack. 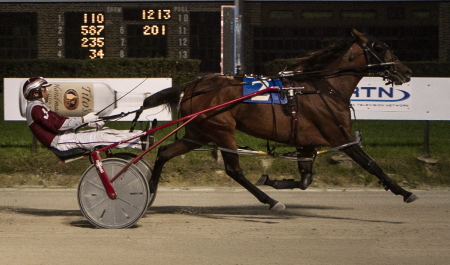 Fox Valley Halsey, (Juan Franco) who won the 2019 Plum Peachy title on the 2019 Night of Champions for trainer Nelson Willis, has a new home for her four-year-old Hawthorne campaign. (Four Footed Fotos)

Fox Valley Halsey had two very successful years for her breeder and original owner Fox Valley Standardbreds, banking over $153,000 with $90,742 coming in her sophomore campaign. Interestingly, as a two-year-old she made her first ten trips to the gate with Casey Leonard at her lines and Hawthorne’s annual leading driver will now be guiding her as a four-year-old.

“She always gave me a good honest effort,” said Casey. “She was always very manageable, just like all of Nelson’s horses are. Time will tell how well she does as a four-year-old. We’ve had Halsey here at our place since she came back from Florida and she’ll be ready once we get back to racing.”

In 2018 Fox Valley Halsey swept her Illinois State Fair juvenile championships at Springfield and the Du Quoin session at Hawthorne with Casey and went on to put $62,819 on her card.

Fox Valley Halsey was sired by Sportsmaster. Some of you might remember her dam Ron’s Girl (1:49.3, $576,458), a 2000 Breeders Crown champion under the care of the conditioner Joe Anderson.

Before Ron’s Girl headed to the Meadowlands she won three consecutive Opens on the Chicano circuit, two at Maywood and one at Balmoral with driver Ryan Anderson. She extended that streak to five with an Open victory at The Big M and another in a $35,000 Classic event at Harrington Raceway in Delaware for Illinoisans John Leahy (Naperville) and Robert Ranquist Jr (Palos Park) and Greg Pistochini of California.

When her racing days were behind her Ron’s Girl clicked on her very first foal as a broodmare when her Western Hanover pacer Western Tsunami (1:50.1) won a remarkable 70 races in a career that saw the horse haul in over a half-million dollars in purse earnings.

Several years down the line we may see Fox Valley Halsey follow her productive mother and become a fruitful Illinois broodmare as well.