Homepage
You are here: Home1 / Mike Paradise2 / Not a Case of Splitting Hairs

As we have discussed here many occasions, the draw for post positions at times can be crucial to a horse’s chances in a race. Just as imperative for any trainer and his or her owner is which division their horse winds up in when a stake race or its elimination is also split by a race office draw.

There’s certainly the case for Sunday night’s pair of $17,500 divisions of the Kadabra for 2-year-old ICF trotting colts and geldings. The winner of Sunday’s first Night of Champions division will visit a winner’s circle for the very first time.

On the other hand leg two of the second Kadabra divisions landed a trio of youngsters who have combined for seven first place finishes in eight career starts and four of those triumphs came about in Illinois bred freshman trotting stakes.

We’re talking about the Tom Simmons stable’s double-stakes winner Fox Valley Quest (Casey Leonard), Dennis Garner’s Fitchey For Fun (Randall Finn) who breezed a Cardinal stake division in his Hawthorne debut, and Desert Sheik (Mike Brink) with a first leg of the Kadabra already on his list of achievements for the Springfield, Illinois based stable.

After going off stride in his Cardinal division, Desert Sheik bounced back in a big way last week when the youngster made up a ton of ground to win in 2:01 flat for Brink and his fellow Illinois owners Mark Brown (Chatham) and Charles Briggs (Altamont). 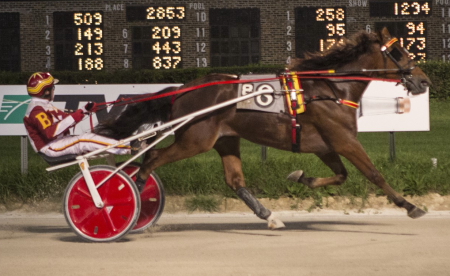 Desert Sheik, an easy winner last week with is trainer Mike Brink at his lines, is a starter in tonight’s tough second division of the $17,500 Kadabra series for Illinois bred 2-year-old trotting colts and geldings. (Four Footed Fotos)

While Desert Sheik’s last past performance line shows him 13-plus lengths behind at the quarter mile pole, the juvenile lagged the gate and gave the other starters an even more head-start and still was over a half dozen lengths ahead at the finish wire. He’ll open up at 5-1 odds from post eight in a field of nine.

In Quest of Another: The 7-5 first flash favorite is Fox Valley Quest and he deserves those initial low-end odds. The Pizzazzed gelding has been much the best in his first three starts, drawing off by 4 and 1/2 lengths in the first round of the Kadabra and two weeks ago front-stepping his way by more than three lengths to a 1:58.2 clocking in a Cardinal division for co-owners Carl Lacey (Athens, IL) and Benita Simmons (Springfield, IL).

Meanwhile in the first Kadabra division Fox Valley Kobe (Kyle Wilfong) is expected to get his maiden victory, hence the low-end 6-5 first flash odds for the Jim Eaton trained 2-year-old. He was a non-threatening third to Fox Valley Quest in the Cardinal and the first round of the Kadabra.

So Far So Good: Lous Abigail (pp, Casey Leonard) has cruised to victories in the first leg of the Fox Valley Flan and in her Violet division and its even-money says the Hawthorne program that she’ll also capture the first division in round two of Sunday’s $17,500 “Flan.”

Bee See (pp1, Kyle Husted), another Steve Searle youngster is the early 6-5 second Fox Valley Flan choice after her game first-over win in a Violet division, trotted in 2:01.1. Mike Brink’s Lauren Hall is listed at 5-2 after being second to Lous Abagail in a Violet event when the Cassis filly was beaten less than one length. 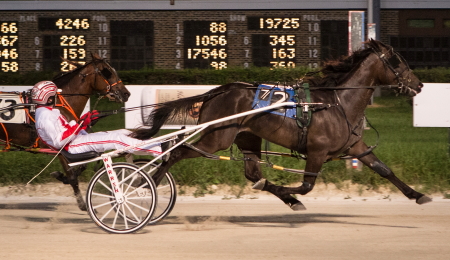 Chalk It Up: Bet down to 3-5 odds after a convincing win a week ago, the filly Fox Valley Exploit didn’t disappoint her many supporters in last night’s first $17,500 division of the Incredible Tillie ICF freshman stake series.

Fox Valley Exploit and Sleazy Gal most of the length of Hawthorne long stretch before the winner pulled away in the last sixteenth of the mile for driver and trainer Kyle Husted and posted a one and 1/4 quarter length in 1:58 flat.

Fox Valley Exploit ($3.40), a daughter of Sportsmaster, is owned by David Brigham of Concord, Michigan and Husted of Altamont, Illinois.

Perfectly Done: The second “Tillie” saw a huge upset as the 9-1 longshot June Dale Gram took advantage of a great trip from driver Ridge Warren and worn down the 1 to 9 probative favorite Double Parked (Travis Seekman) in the late going for her maiden victory.

Double Parked had it all her own way on the front-end, going to a leisurely 59.1 first half with the JD Lewis trained June Dale Gram in the pocket. Warren tipped JD Dale Gram out in the final sixteenth and the home-bred swept past, more than a length the best in 1:55.2, ending Double Parked’s unbeaten streak at three in a row.