Homepage
You are here: Home1 / Mike Paradise2 / Not Just Quantity on Sunday Night

Sunday’s card at Hawthorne has all the right ingredients for an entertaining evening of harness racing, a quite possibility a program that could do well wagering-wise as well.

A larger than normal 14 race card starts off with a pair of $17,500 Night of Champion series stakes divisions for ICF two-year-old trotters, and their followed by the $12,000 Open Trot.

A few races later another pair of $17,500 “Dygert” stake series contests are on tap, and for those who want to watch and be on some good horses later in the evening, the $12,000 Open Pace for fillies and mares will go as race twelve with nine distaffers going to the gate.

Sprinkled in between these five figures co-features, are several competitive events for pacers, so buckle up for a long and interesting night of racing.

For Openers . . . Sunday’s first race is the initial Kadabra second leg division Night of champion series for ICF two-year-old male trotters. The first flash odds will show Fox Valley Cairo (Mike Brink) as the 7-5 favorite based on only a head loss in his Cardinal split.

Hot To Trot Sparkly (7-2 in the morning line appears to be the youngster too catch when Todd Warren taking over the lines from trainer Steve Halford II.

Chhochy, Mr Mizzlou, Loyzhoneytonkero, Scat Back, Upfront Flight and Lous Barbossa’s are the other Kadabra aspirants in the first division. 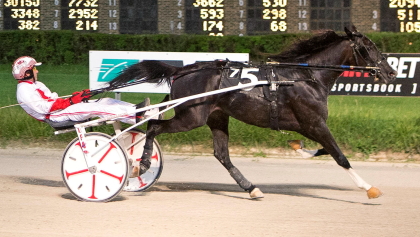 Our Turn Guys: The ICF freshman fillies take over next in race two, a second leg division of the $17,500 Fox Valley Flan Two fillies with nice wins in their respective Violet divisions—Ironclad Creation (Ridge Warren) and ICF star Louzotic’s baby sister Lous Xanadu (Kyle Husted) should get the bulk of the public’s wagering money.

No Easy Task: The $12,000 Open Trot follows with the Merv Chupp stable’s Pine Dream (Todd Warren) fourth Hawthorne of the season in the track’s top overnight event for trotters. The now nine-year-old also has three second ad a fifth in his other local Open outings.

Pine Dream won’t have it easy being handicapped with the outside seven post and with a strong field made up of Cash Hit, Lousraptor, Louzotic, Talk About Valor, Annas Lucky Star and Walter White starting inside the winner of 47 lifetime races.

Just Two, Thank You: The juvenile Night of Champions series returns for races six and seven with the second Fox Valley Flan division served up first. According to the morning line it’s strictly a two-horse race between the fillies Funky Wiggle (4-5, Curt Crummel) and Armbro Lark (9-5. Charles Arthur). 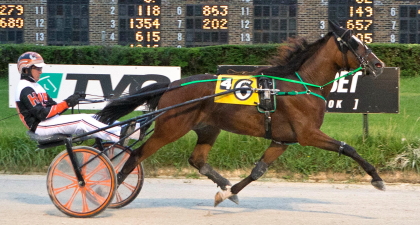 Lous Xanadu (Kyle Husted), the younger sister of Louzotic, is fresh off a victory in her Violet stake last weekend. The Steve Searle youngster is a strong contender in tonight’s first Fox Valley Flan stake on the Hawthorne card. (Four Footed Fotos)

More Like It: The USTA computer generated morning line does give 5 of the 7 colt or gelding trotters in the second Kadabra split a realistic chance of winning that stake event.

Your 30-1 longshots in the race are Powerful Prophet (Atlee Bender) and Blacky (Jordon Patton).

Worth the Wait: I can understand the Hawthorne Race Office waiting to the 12th race to card the $12,000 Open for pacing fillies and mares because most of the other Sunday night race venues are over. It’s a solid nine-horse field and it starts off the track’s 50 cent Pick Three.

The Todd Warren Stable’s Maggie Rhee, allocated the outside nine-hole, has been sensational all meeting, chalking up five first place finishes and a trio of seconds in her eight Hawthorne Open starts. A tip of the cap to the 58-year-old Warren, only 17 wins away from 1,000 as a trainer, on the job he’s done keeping the four-year-old Jereme’s Jet mare so sharp for so long (two and one-half months) at the Hawthorne meet

Maggie Rhee is riding a three-race Open winning streak and just like last week, Todd’s32-year-old son Ridge will be in the bike while Todd drives the stable’s Allbeastnobeauty, third last weekend.

Saturday Wrap-up: After runner-up finishes in his first two career starts, Frontier Bombay showed last night he could very well be a force in the ICF two-year-old male pacing class with a victory in the first Incredible Finale stake division.

Driver Todd Warren gave the Jim Eaton stable’s freshman gelding a ground-saving winning journey, finishing more than one length ahead of the 4-5 public’s choice (Terry Skinner) in the 1:56.2 mile.

Sent off has the third betting choice, Frontier Bombay ($8.80) was fired out from the four slot and into a quick lead. Titotito (Atlee Bender) brushed to the front after a slow 30 flat first quarter and soon after Skinner had Magazine Theme on the move, making the top before the half was reached in :58.3.

Frontier Bombay was third on the inside, full of pace, but without room as they turned for home. However, Magazine Theme drifted enough in the stretch to open the inside lane and Warren took advantage, shooting through with the Major Bombay gelding and pulling away for Illinois owners John Swartz Jr., Patricia Tiernan and Jim Eaton, and Robert Silberberg of Michigan.

Hammered down to 1-5 odds, Fox Valley Ozzy ($2.40) took over the lead on the backside and proceeded to a two-length triumph over Get E Up (Kyle Husted). The early leader Fox Valley Crete (Kyle Wilfong0 was third, another two and one-half lengths behind.

Fox Valley Ozzy is owned by Steve Mackin and Dave Samuelson, both of Marengo, Illinois.

Eight is Enough: It was an enjoyable Saturday evening for your author who had eight winners as top selections.

So Far, So Really Good for “Ozzy” Next Up: Round Three of the Carey Series
Scroll to top