In yesterday’s column I wrote:

“What if Fox Valley Gemini wins again Friday night? What’s next? Make him start 20 yards behind the field? Tell his connections to leave the state with the star ICF pacer if they want him raced?

It turns out handicapping “Gemini”, with the 10-hole, in a five-horse race didn’t keep the star of the Terry Leonard stable from his fifth consecutive Open victory at Hawthorne. This time he did it going from last to fifth in the final eighth of the mile, by pacing torrid 25.1 last quarter for driver Casey Leonard.

Dash Of Danger (Kyle Husted), came on for second while the pace-setting Rising To The Top (Travis Seekman), settled for third. 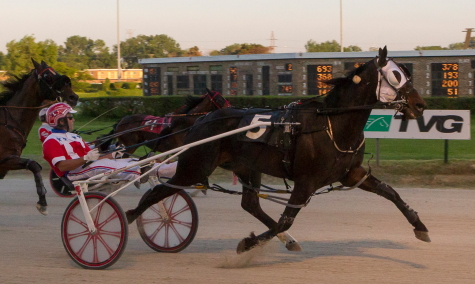 Casey took Fox Valley Gemini ($2.40), back at the start and was content to bide his time, when first Sir Mammo (28.3), had the lead and then Rising To The Top took the field to a 56.2 half and a 1:24.3 time at the three-quarters, with the 1 to 5 public’s choice still some six or so lengths behind the leader.

However, once Casey tipped “Gemini” out for the stretch drive, the pacer just roared past another Open field for owner Jim Ballinger of Atwater, Illinois. The two-time Illinois Horse of the Year has lost only once at Hawthorne in 25 career outings.

Casey returned to the winner’s circle one race later, when he guided Indiana invader Caviart Midnight ($7.00), to a neck win over Royale Rose, in the $10,000 Open II. The winner is trained by Jim Eaton, for Michigan owner Robert Silberberg of Farmington Hills, Michigan.

Casey had six winning drives on the night.

Are You Kidding Me? Any doubts that the talented ICF pacing mare, Bucklegirl Bobette, may not be quite ready for her 2019 Hawthorne debut were erased when the 6-year-old Rob Rittof trainee, stunned those on hand for last night’s qualifiers with a hard-to-believe 32-plus lengths, first place finish in 1:52 flat. Driver, Travis Seekman, no doubt enjoyed the ride while six other horses were inhaling “Bucklegirl’s” dust.

Something Has To Give: At least one pacer’s winning streak will come to an end Saturday night and possibility two if there’s an upset in the eleventh race conditioned pace headliner.

Roshun Trigg’s unbeaten three-year-old Captain Mulzac, guns for his fourth consecutive victory at Hawthorne in a $9,200 pace and after his last romping victory he figures to be low-end post-time favorite with driver and trainer Ronnie Gillespie.

Captain Mulzac simply destroyed a field the last time he raced on May 20th. The winning margin was a widening 15 lengths in 1:52 flat and he had more left in the tank.

The son of Captaintreacherous was a $15,000 yearling buy by Trigg and the colt has already got more than that amount back after sweeping the recent Phil Georgeff Late Closer Series, Captain Mulzac starts from post seven while the red-hot Hart To Heart (Ridge Warren), drew even further outside.

Hart To Heart won every leg of the Bob Larry and a prep for that series on the first weekend of May, so he’ll carry a four race victory streak of his own into the Saturday affair for the Mike Brink Stable. The 4-year-old ICF gelding also comes off a 1:52 mile.

Meanwhile, both pacers have to contend with Rockin Eddie, who went wire-to-wire in 1:53.2, last week when Casey Leonard took over his lines for trainer Aleksandra Karl. The Indiana bred gelding leaves from post four.