Homepage
You are here: Home1 / Mike Paradise2 / One Does Make a Difference

There’s an old idiom that “One Makes a Difference and it sometimes does. It might be one person who made that difference, or maybe one vote that changed an outcome.

This weekend at Hawthorne the one- difference, was the one- more entry in Sunday’s first leg of the Erwin F. Dygert colt and gelding trot, changing things in a big way for those owners and trainers with horses in the race.

Both Friday’s opening round of the Carey series for ICF male pacers and last night’s Plum Peachy filly pace saw 11 horses entered and both fields went to the gate in single divisions with a $12,500 purse on each.

However, with an even dozen passing the entry box for Sunday’s Erwin Dygert, the added money event had to be split into a pair of six-horse fields with $12,500 divisions on each, as mandated by the stake series rules. So instead of six starters not getting a check like in the Carey and Plum Peachy, only one Dygert split horse in each won’t, while the winning owners of the two trotters will haul-in the $6,250 first place share of the purses. 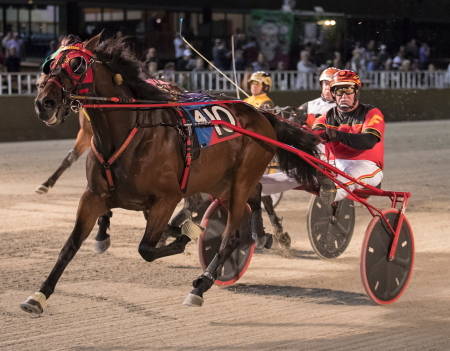 Trixie’s Turbo is, a starter in Sunday’s first division of the Erwin F. Dygert stake series, was the 2018 Illinois 2-Year-Old Male Trotter of the Year. (Four Footed Fotos)

The first division is headed up by the 7-5 morning line favorite, Trixie’s Turbo (pp 3, Tim Curtin), last season’s Illinois 2-Year-Old Colt Trotter of the Year. The Jill White trained Trixie’s Turbo made a break in last week’s prep after a dominating win, the first time on Lasix, against a similar field.

Trixie’s Turbo boasts a career bankroll of over $100,000 and an impressive record of eight first place finishes in 14 lifetime starts.

A field of nine will tangle in the sixth race Beulah Dygert for second season filly trotters, with last year’s champ Louzotic (pp 2, Kyle Husted), certain to get the lion’s share of the public’s wagering. 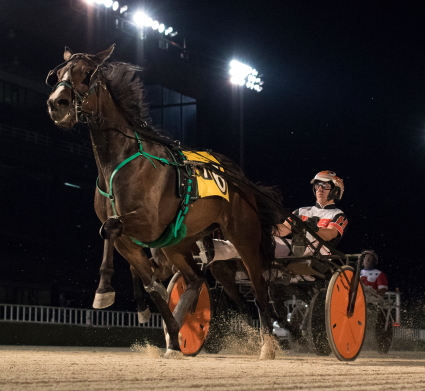 The Terry Leonard stable’s Fox Valley Triton (pp 3, Casey Leonard), is a prohibitive 4-5 programmed favorite in the Paradise, while Image Cruisingaway (pp 1, Tim Curtin) is a low-end 7-5 early choice in the Salvaro.

The Dunseide Perch filly, trained by Jay Garrels, covered the mile in 1:53.3 for her seventh career triumph in 13 starts.

Now That’s Close: Earlier in the night the Bob Larry series final figured to be a very competitive showdown and it was just that, when less than one length separated the first place finisher Hart To Heart (Ridge Warren), from the fourth place horse Salvatore (Casey Leonard).

Rock Steady Ron (Jamaica Patton), was a game second, beaten a head in the 1:52 flat mile, while Heza Real Diamond was third, only a neck behind the Mike Brick trained winner owned by Illinoisans Donna Crebs (Cantrall) and Judy Conzo (Lincoln).