Homepage
You are here: Home1 / Mike Paradise2 / Opportunity Knocks for Shehan in Cardinal

A few weeks ago Tyler Shehan wasn’t sure if he would have a drive in the 3-year-old Cardinal Pace stake and if he did secure one it would likely be of the longshot variety.

However, that situation not only has changed for the 34-year-old Kentucky native, it’s been transformed in a huge way after Shehan guided the Freddie Patton Jr. Stable’s Fox Valley Reggie to a convincing victory in one of last Saturday’s Cardinal elimination.

Fox Valley Reggie nailed down his first victory of the season by drawing away by almost four lengths from his nearest rival. His time of 1:52,3 (26.2 last panel) knocked three full seconds off the pacer’s best previous winning mile set as a freshman in a division of the Governor’s Cup at the Du Quoin State Fair last summer. 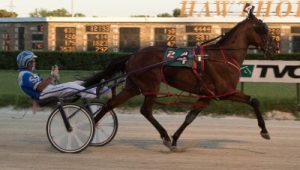 “Freddie came up to me one night and told me he was going to put be down to drive his 3-year-old Fox Valley Reggie. He didn’t tell me much about the horse, he just said “don’t get locked-in.”

“As it turned out I did get locked-in when the horse finished very strong. Last week in the Cardinal elimination I just got him in the middle of the track and he drew off (26.2). He won that race pretty easily. I’m looking forward to driving him in the final. It would be nice to win the Cardinal.”

Fox Valley Reggie is a son of Yankee Scraper owned by Ron Phillips of Athens, Illinois and Sharry Boledovich of Lakewood, Colorado. The pacer’s dam Ron’s Girl was a 10-time winner for the Joe Anderson Stable as a 4-year-old and captured the Breeders Crown Distaff Pace in 2000. She had a mark of 1:49.3, earning $576,478 in just a little more than 3 years of racing.

Fox Valley Reggie drew well for tonight’s ninth race $27,600 feature with the three-post but so did last week’s other Cardinal elimination winner Ima Skydancer (Tim Curtin) with the two-slot and the pre-stake favorite Fox Valley Nemitz (Casey Leonard) who made a break in his elimination going out for early position from the eight slot received a significant post shift with the rail tonight for trainer Nick Giberson.

Fox Valley Nemitz had posted victories in both of his Carey stake series legs for Fox Valley Standardbreds of Sherman, Illinois.

Ima Skydancer is two-for-two since trainer Mike Brink turned over the driving chores on the Skydancer Hanover freshman to Tim Curtin who won a division of the Carey stake series racing the youngster out of a hole (1:52.1) and then last week putting the pacer on the front where he picked-up a nose victory in his Cardinal elim with a 1:52.2 clocking. 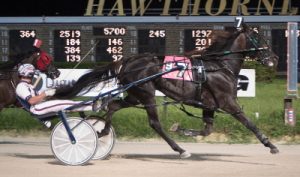 Fancy That: The Kim Hamilton Stable’s Fancy Creek Jolene ($23.80) flew down the stretch for driver Matt Avenatti and pulled off an upset victory in last night’s $27,500 Violet Final for ICF 3-year-old pacing fillies.

Patiently handled by her 23-year-old driver the 10-1 longshot paced a quick 26.2 last quarter when she swept past for South Chicago Heights, Illinois owner Frank Marcolini with a career fastest time of 1:53.4.

The 4-5 pacesetting favorite Lady’s Party (Casey Leonard) had to settle for second, beaten 1 and 1/2 lengths, while the 30-1 longshot My Kind Of Dance (Tyler Shehan) came from ninth at the top of the lane to be third.

Avenatti dropped Fox Valley Jolene (pp 7) in line at the start and the daughter of Sportsmaster was eighth at the first quarter (28.2). She was seventh in the outer flow at the half (58 flat), tipped three deep in the final turn, and then went into high gear, coming on in the middle of the stretch as straight as an arrow for her third season victory in 10 starts.

How About a Half of Million Dollars: It’s going to be interesting just how much money will be wagered on the tenth race Jackpot Hi-5 tonight. With a whopping $500,000 guaranteed pool for the 20 cent bet it’ll probably exceed a half-million dollars.

The 20 cent wager has gone unclaimed through 38 nights of the Hawthorne meet and now has a carryover pool of $224,190.

To win the Jackpot Hi-5 a ticket must have the first five horses in the correct horse of finish. If there’s just one winning ticket, that person goes home with the whole Jackpot Hi- 5 pool after the track and the State of Illinois takes out their cuts.

Hard to Believe Fact: As huge as tonight’s Jackpot Hi-5 pool will be, it won’t be close to the record pool on an Illinois harness race. That came about at Sportsman’s Park on July 24, 1985 when the old Cicero, Illinois track was conducting its “Super Bet”

A winning Super Bet ticket had to have the correct Trifecta finishers in three consecutive races on it. The pot grew to $1,469,768 when the first seven figure payoff in pari-mutuel racing history went to a four-partner Chicago betting team of “regulars” that included a CTA bus driver.

The winning $64 wheel ticket rewarded the four member team with a check for $734,894 each.

Legislation for Illinois OTB parlors didn’t pass until 1987 and full-card simulcasting was still years away, so the entire Super Bet record pool of nearly $1.5 million was built up strictly through the betting windows of Sportsman’s Park by its on-track patrons.

Now that’s one Illinois on-track wagering pool record that indeed will stand the test of time.