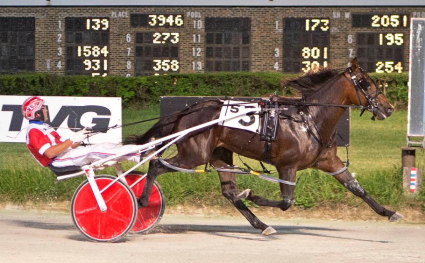 The 2021 ICF freshman champion Fox Valley Ozzy looks to pick-up where he left off last year against strictly other state-bred pacers.

The Gary Rath trained pacer was perfect as a two-year-old at Hawthorne, going eight-for-eight and after observing his two prep races prior to tonight’s $30,000 Illinois bred affair you have to like is chances of keeping his gaudy record intact.

Rath had to be pleased with both of “Ozzy’s” races as a four-year-old and they came against older more seasoned open company pacers.

Last weekend the World of Rocknroll sophomore was fourth, with Rath at his lines, beaten two lengths by the one-two finishers Yankee Bounty and Ima A Real Ladys Man, both boast marks lifetime under 1:50 with $1.1 million in purse earnings between them.

A week earlier “Ozzy” was a game second while pacing in 1:53.3, coming home in a quick 26.3, and it was his first outing since last September.

Fox Valley Ozzy’s only two losses in his first season for Marengo owners Steve Mc MacKin and David Samuelson came at Springfield when the pacer dropped neck decisions to Kyle Husted’s Get E Up who we will see later in the summer meet.

Nevertheless, “Ozzy” more than made up for those blips on his juvenile past performance lines by beating his rival in each of the four NOC Series legs and in the $138,000 Incredible Finale showdown on the Night of Champions, all with Casey Leonard driving.

With only four state-bred sophomore foes taking on Fox Valley Ozzy in tonight’s sixth race $30,000 headliner. “Ozzy” figures to be a heavy favorite. Getting away from the three-slot in the five-horse field gives driver Casey Leonard options, although I expect an early move from the 44-year-old Harvard, Illinois native.

Gemini Sighting: The Friday card also has a $11,700 Open II Pace on the nine-race program.

With He’zzz A Wise Sky written out of the event, the post time favorite figures to be Fox Valley Gemini, who has thrived at Hawthorne in his six racing seasons with 43 of his 47 lifetime wins coming on the Cicero, Illinois mile oval, all with Casey Leonard in the bike.

“Gemini” went over the $600,000 plateau in career earnings in his latest win on March 4th for Atwater, Illinois owner Jim Ballinger. The Yankee Skyscaper gelding has never missed a check in any of his Hawthorne starts and has a lifetime mark of 1:49.2, taken at last year’s local meet.

He’zzz in Ohio: Illinois star He’zzz A Wise Sky was back in Ohio last night with his sights set on a second consecutive victory in the $28,000 Open I at Miami Valley Raceway.

The John Filomeno ICF pacer was parked out to a 26.2 first quarter leaving from the outside handicapped eight post. He’zzz A Wise Sky did get a 28.3 second quarter breather however he needed a 27.1 third quarter to keep the lead and eventually tired in the lane.

Hansen, Seekman Double Up in Opens Don’t Kiss Off This Saturday Night
Scroll to top