Homepage
You are here: Home1 / Mike Paradise2 / Pacer has a Thirst for Success

When Friday night’s second race $13,500 Open Pace comes about and you’re doing your handicapping there will be two very noticeable details that will no doubt come into play when you look at the lines on Let’s Drink On It:

The pacers career earnings and his fastest winning mile.

In both cases, they are superior to any of Let’s Drink On It’s five foes in the race and a couple of the reasons why the Hawthorne Race Office once again assigned the Joe Seekman Stable’s 6-year-old pacer the outside post; in tonight’s case it’s the six. 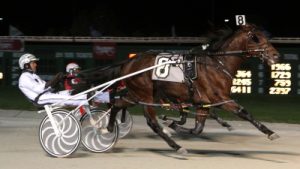 Let’s Drink On It, a son of Art Official, sped to a 1:48.3 victory at the Meadowlands as a 3-year-old and matched that time the next year when he won at the Hoosier Park Invite.

Again Yankee Bounty is next in tonight’s Open with the second fastest lifetime mark a 1:49.4, taken at the Meadows, a five-eighths track, in his 3-year-old campaign.

The Open Pace posts were obtained in groups.

The allocated outside six- slot isn’t a bad thing for Let’s Drink On It because of the horse’s style of racing which is coming from out of it.

His trainer Joe Seekman told the media before the horse’s Breeders Crown appearance: “Let’s Drink On It doesn’t leave a lot. He’s a horse that likes to drop in where he goes. He responds best if he can come with cover and as soon as he tipped him off from cover, the horse kicks into a higher gear.”

While Let’s Drink On It hasn’t raced frequently on the Chicago Circuit, he has competed on it every year except 2016. It’s always been a profitable trip to Illinois for his quartet of owners Tina Seekman (Gaston, Indiana), Larry Bond (Frankfort, Indiana), Hal Hewitt (Versailles, Kentucky) and Vincent Boido Jr. (White Lake, Michigan).

Let’s Drink On It’s last start in his freshman season was a victory in the 2013 American National 2-year-old stake, netting his owners a $54,240 paycheck.

As a 4-year-old the talented pacer came to town to compete in Balmoral’s $136,500 American National Aged Pace against the likes of Always B Miki, Foiled Again and Bettors Edge, and finished fifth, banking another $5,460.

This year Let’s Drink On It made his first eight starts of the season at Hoosier Park, winning four of those races.  In his three Opens at Hawthorne, he has a second, a win and a third place finish two weeks ago.

The pacer’s most lucrative season came as a 3-year-old, when he raked in over $420,393 with a good slice of that amount ($77,700) coming with a second place finish in the Little Brown Jug Final in Delaware, Ohio.