By Mike Paradise
Illinois conceived and foaled 3-year-old pacing fillies take over the center stage Friday night at Hawthorne with the second leg of the Plum Peachy stake series. A pair of $12,500 divisions will be contested with the stronger second division especially an attention-grabber.
The sixth race landed both Plum Peachy opening leg victors Char N Marg (Casey Leonard),shown in a Four Footed Photo, and Lexington Lady (Matt Krueger) but also Hawthorne’s Late Closer champ Likeafireballshot (Jared Finn), three-time season winner Whiskersonkittens (Todd Warren) and County Fair freshman champion Art Angel Baby (Todd Warren) coming off a pair of June triumphs.
Art Angel Baby began her career with eight starts on the Illinois Fair Circuit and came away with triumphs in seven of them, including the Stallion Stakes at Charleston and the Downstate Classic at Lincoln while she was under the care of trainer Kelsey Perymond.
The Sagebrush filly was sold by Bridget Williams (Jackson, Mississippi) and breeder Freedom Hill Farms (Watseka, Illinois) to W J Donovan of Pompano Beach, Florida, one of national trainer champion Ron Burke’s owners.
Art Angel Baby made one start for Burke as a freshman, winning at Tioga Downs in 1:55.2 before getting the winter off. Burke sent the filly to Canada to start off her sophomore campaign where she made three starts for trainer Ben Wallace and picked up checks in each.
Art Angel Baby came to Chicago for the first leg of the Plum Peachy however she was knocked off-stride in the lane and was moved up from fifth to fourth. Burke then took her to Hoosier Park a week later where she won in 1:54 flat.
The filly was then sent to Illinois Harness Hall of Fame trainer Roger Welch and she promptly drew off a week ago (1:55.3) in her first start on Lasix.
Char N Marg was a romping six-length winner (1:53) in her initial Plum Peachy division. Last year’s Orange and Blue champ pulled down over $125,000 in her first campaign for Chicago owners Quaid Racing.
Lexington Lady was also an easy winner in her Plum Peachy split for owner and trainer Hosea Williams with a 1:54 front-end victory, her 10th in 19 career starts.
Exclusive Design (Dale Hiteman, Dakota Sleek (Ridge Warren) and True To My Heart (Pat Curtin) are the other sixth race Plum Peachy hopefuls.
Friday’s first division of the Plum Peachy will go as race three. That second leg stake is a wide-open affair with Dandy’s Diva (Travis Seekman), LK’s Nancy Lee (Dale Hiteman), Bucklegirl Bobette (Kyle Wilfong), Fox Valley Gypsy (Casey Leonard), Ashlee’s Fine Lady (Matt Krueger), Lacarmeliliana (Matt Avenatti), Aunt Ethel (odd Warren) and Sara’s Terror (Tim Curtin).
A Likely Scenario: The second legs of the Beulah Dygert filly trot and the Erwin S. Dygert for ICF male trotters are in the history book.
In the first division last night of the Beulah saw Kyle Wilfong give More Than Likely ($6.40) a winning garden trip behind the pacesetting Roma Falls, winning in 1:59.2 over the favorite Rocknprincessabbey by a half-length.
Kyle Husted gave Surviver DI ($10.60) a patient four-hole trip before tipping he rout in the final turn where the Steve Searle trainee responded nicely and overtook the 2-5 favorite Vengeful in the lane and posted a career fastest 1:57.4 mile.
Vengeful held off a fast closing Powerful Princess for runner-up honors.
The first division of the Erwin Dygert stake for ICF freshman colt and geldings was strictly no contest as the overwhelming 1 to 5 public’s choice Fear didn’t disappoint his many backers. 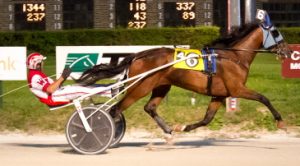 Todd Warren had Fear four wide in the first turn determined to get his trotter to the front and he did at the first quarter pole, reach in 29.2. The Kenny Collier trained gelding coasted to a 1:58 flat victory and wrapped up a starting berth in the stakes final in Hawthorne Night Of Champions on Sept. 19.
Fear also breezed in 1:58 in his division of the Dygert trot back on June 4 and now has 100 points after two series legs.
The Mike Brink Stable’s Hail Caesar ($4.40) proved best in the second division for Casey Leonard as the 6-5 post-time favorite. Primed N Powerful took second while Wrightwood was third in the 1:59 mile.
Earlier (race two) Hail Caesar’s 2-year-old sister Scarlett Ribbons made a stop in the Hawthorne winner’s circle with Casey. Both youngsters are by Powerful Emotion out of the broodmare Love You More.