The Chupp Racing Stable’s Pine Dream looks to make it three consecutive wins in Hawthorne’s Open Trot Sunday night for driver Casey Leonard and with his horse’s chief rival not in the $12,000 headliner it’s 9-5, according to the morning line, that the seven-year-old trotter will do just that.

Pine Dream kept busy last weekend by competing in a $25,000 Open at Greenville Raceway in Ohio where he was nosed out of first place in a quick 1:55.1 mile on a half-mile oval. His second place finish was still worth $6,250 to owners Merv and Kelly Chupp and raised the Pinetucky gelding earnings to $118,655 for 2019.

The Hawthorne Race Office assigned Pine Dream the eight-slot in Sunday’s fifth race but there are only eight horses going to the gate and with the Pine Dream’s versatility the odds still say he’ll overcome it.

Since Casey Leonard has taken over the driving chores on Pine Dream for the Chupp stable the trotter has been first or second in five Hawthorne Open trots, raking in $24,000 in those events with three wins and two seconds.

Pine Dream has some new Open foes to conquer this time around with the 10-year-old veteran Banker Volo (pp 1, Travis Seekman), in from Running Aces and Got The Groove (pp 5, John De Long) a Hoosier Park ship-in.

While Banker Volo’s summer home base is in Minnesota he’s a familiar visitor to Hawthorne where he races out of trainer Angie Coleman’s barn. The Yankee Glide trotter possesses 41 career and lofty earnings of $477,163.

Got The Groove, now four, had a banner year as a 3-year-old for the De Long family, hauling in over $138,000 while racing mostly in Indiana sire stakes. The gelding finished his sophomore campaign in open company stakes, winning a division of the $42,600 Pegasus and a second place finish in a $48,500 split of the Circle City, both at Hoosier Park. 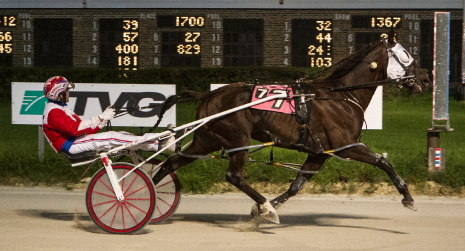 Driver Casey Leonard sent the Terry Leonard trained five-year-old mare out from the outside seven- slot and she grabbed command before the first quarter (28 flat). With no challengers Rockin N Running coasted through a 29.2 second panel. Casey let the mare out a notch after the 57.2 half and a 28 flat third panel put some distance between the winner and the rest of the field.

Nice Birthday Gift: The $12,000 Open for colts and geldings followed and the bet-down 2 to 5 choice Fox Valley Gemini gave his owner Jim Ballinger a $6,000 birthday gift with a 1:51 flat win on a track listed “good” with a rapid 26.2 last quarter.

Casey Leonard, who drove five ICF stake champions Friday night and delivered eight winners on the double header card won for the fourth time in the first seven races Saturday, behind the star of his father stable.

The 41-year-old Harvard, Illinois native dropped Fox Valley Gemini into fifth in the early going while first Hot Rod Dylan (27.2) had command and then the 2-1 second choice Granite took over on the backside. Meanwhile “Gemini” grinded his way towards the leader and despite Granite’s 28 third quarter, drew even, and then sprinted past in the lane, pulling way by three lengths to career victory No. 28 in 37 trips postward.