In all types of competition fans want to be treated to a good “match-up.” Saturday night at Hawthorne we have a topnotch match-up in all four divisions of the second legs of the Night of Champions stake series.

In the second race first Beulah Dygert 3-year-old filly trot first leg winner Good Design (pp 3.Kyle Wilfong) looks to get back in the winning grove against New Queen (pp 1, Casey Leonard) who defeated last season’s Illinois 2-Year-Old Filly Trotter of the Year when they meet earlier this month in a division of the Violet.

Trotting Grace (pp 2, Kyle Husted), second in both the first Beulah Dygert leg and to New Queen in the Violet, is another major threat along with Downstate Classic champion Lous Silver Star (pp 4, Juan Franco). Shadow Copy (Gary Rath) and Fox Valley Unleash (Robert Smolin) are the longshots of that race. 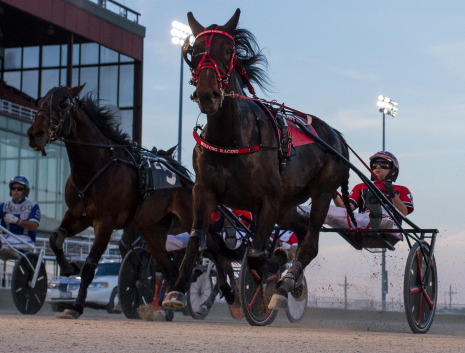 The pride of the Dale Kanitz stable figures to get a strong challenge from The New Americana (pp 2, Casey Leonard) who was the runner-up in her stake series outing and was third to “Jazzy” in the Violet. The Steve Searle trained filly put almost $70,000 on her card as a freshman. 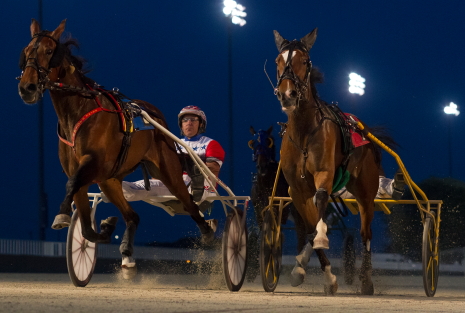 Maui Mama (left, Casey Leonard) and White Pants Fever, the one-two finishers in a first leg of the Beulah Dygert, square off again in a second round of the state-bred filly trot tonight. (Four Footed Fotos)

The second Plum Peachy event on the 12-race card has Allbeastnobeauty (pp 8, Tim Curtin) looking to make it four in a row and remain unbeaten as a 3-year-old. The Mike Brink trained filly beat Fox Valley Jazzy in their initial Plum Peachy leg with a career fastest 1:53.2 mile and then crushed her field in a division of the Violet by seven widening lengths.

Hosea Williams Rollin Coal was a comfortable front-end winner in her first Plum Peach leg but went inside the pylons and was disqualified in her Violet division. Rollin Coal was scratched sick two weeks ago. If she’s near her best she can give Allbeastnobeauty all she can handle tonight.

We won’t have to wait long for the first anticipated match-up of the night. It’s come in the first race for 2-year-old pacing fillies when the one-two Violet finishers Tom Graham Stable’s Winter Gram (Ridge Warren) and Fox Valley Halsey (Casey Leonard), from the barn of Nelson Willis, tangle again.

Anna’s Lucky Star (pp 8, Kyle Wilfong) and Picky Picky Valor (pp 5, Casey Leonard) have won all five of the Open trots raced thus far at the Hawthorne meet but that streak is in danger in the eleventh race $10,000 Open.

The Jim Eaton Stable’s Walter White (pp 7, Kyle Husted) is in town after pulling down over $70,000 thus far this season competing in Ohio and Indiana. Walter White made one Hawthorne appearance at the winter meet and came away with an Open victory. Last summer the now 6-year-old trotter started on the local scene twice, capturing one Open and was second in the other.