Homepage
You are here: Home1 / Mike Paradise2 / Plenty of Standardbred Tradition at Hawthorne

While thoroughbred racing has been its staple for over a century at Hawthorne Race Course the Stickney, Illinois racetrack also has an abundance of harness racing tradition as well.

When Hawthorne conducted its first Standardbred meeting in 1970, some five decades ago, its initial drew meeting attracted some of the best pacers and trotters in the country and many of the sport’s top drivers and trainers.

Farrington would become Hawthorne’s first leading driver with 33 winners in a meet that went from April 14 that year through May 22. Other memorable drivers that first year also included Walter Paisley, Jim Dolbee, Jack Williams, and Dwayne Pletcher. 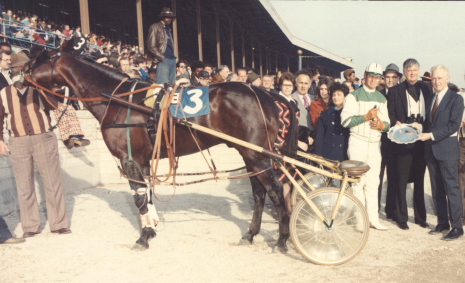 The late Robert F. Carey (right), general manager of Suburban Downs, was in the winner’s circle in 1974 to honor National Hall of Fame pacer Sir Dalrae and driver-trainer Jim Dennis. Note the sulky in those days was made of heavy wood. Also take notice of the jam-packed old open-air Grandstand at the old Hawthorne facility. (Hawthorne Photo)

Riegle’s Robert E. Adios would become the track’s first record holder pacer with a 1:59.3 clocking. The trot mark of 2:00.4 was established by Dayan (Bill Myers) who would go on to be named the 1971 Trotting Horse of the Year.

In 1972 the illustrious Speedy Crown, the Three-Year-Old Trotter of the Year in 1971, would equal the trotting track record with trainer Howard Beissinger, a 1975 National Hall of Fame inductee.

Also in 1972 Hawthorne’s track record would be demolished by the pacer Nansemond by more than two seconds with a 1:57.1 mile. The sport’s one-time lifetime dash champion Herve Filion (15,183) came to town to drive Nansemond.

Al La Carte Stable’s Sir Dalrae (Jim Dennis), the 1973 Harness Horse of the Year, was a “regular” in 1974 at Hawthorne and a frequent visitor to it’s winner circle. The National Hall of Fame pacer had victories in the Overcall and the Poplar Byrd Stakes before later annexing the Suburban Downs Pacing Derby in 158.1. 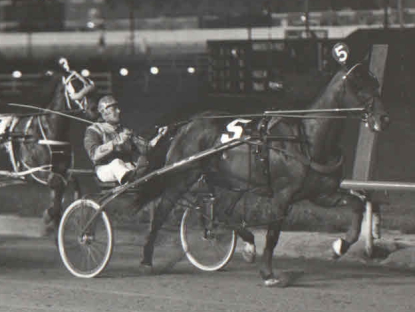 The legendary Rambling Willie (Bob Farrington) became a top-notch pacer at the age of four and 3 of his 11 wins in 1974 came early that year at Hawthorne.

Also in 1974 a lightly raced 4-year-old by the name of Rambling Willie came to Hawthorne for its Newcomer Series and the Bob Farrington Stable gelding became an instant hit with Chicago circuit fans.

Nine years later at the age of 13 the legendary Rambling Willie would surpass the great Niatross as North America’s as harness racing’s leading money winner with lifetime earnings of $2,088,218, “Willie” ended his racing career has the winningest harness horse with 128 victories with a record 79 sub 2:00 winning miles.

Hawthorne became the first Chicago Circuit track to handle over $2 million on-track for a single program when $2,018,873 went through its mutuel system on Saturday afternoon March 15, 1975,