Homepage
You are here: Home1 / Mike Paradise2 / Polar B Pleasant and Unexpected Addition for Owner

By Mike Paradise
We all know things don’t always go as planned and sometimes that can be a good thing.
It turned out that way for one-time Chicago circuit driver Wayne Temple.
The now 73-year-old Ohio native went to the Illini Classic Sale two years ago with “no intention of buying a horse,” Instead Temple is the happy owner of Polar B, one of the favorites for Saturday’s $17,850 Cardinal Trot Championship for ICF 3-year-old colts and geldings. 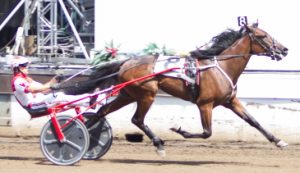 The Hosea Williams trained gelding comes off a victory in last Saturday’s Cardinal prep after earlier winning the Springfield State Fair in a season best time of 1:52.2 with regular driver Todd Warren. Polar B finished second on “Champions: Night.”
“I went to the sale not looking to buy anything but when Polar B came into the ring he caught my eye,” said Wayne. “There wasn’t a lot of bidding on him and his price ended up only being $2,500.
“He’s turned out to be a nice little trotter. He isn’t a great trotter but he’s better than having an empty stall.”
A lot better.
Polar B has earned over $44,352 in his freshman season with a good chance to add to that total Saturday evening.
“We didn’t rush the horse. We took out time with him and didn’t make his first start until the first leg of the (Kadabra) series in late June.”
Polar B notched his first victory of the career about a month later and has been no worse than second since.
“We had some problems with his shoes early on,” continued Temple. “Hopefully we’ve got that taken care of. He did look solid trotting the other night. We’ve had the horse going back and forth from the racetrack with Hosea to out here at my farm (Mokena, Illinois).
“He seems to have a good attitude now and hopefully he’ll do well Saturday.”
Temple drove on the Chicago circuit in the early and middle 1970s competing against the likes of Walter Paisley, Daryl Busse, Stan Banks, Joe Mark Jr, Jim Dennis, Jim Curran and Jerry Graham.
Wayne was a regular at Sportsman’s Park when the racetrack annually lured such Hall of Famers as Stanley Dancer, Joe O’Brien, Billy Haughton, just to mention a few, to compete with their star pacers and trotters in its nationally recognized American National’s. 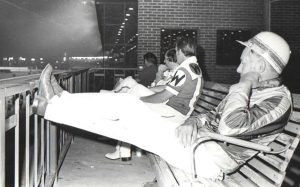 I posted a picture of the porch outside him old Sportsman’s Park driver’s room where horseman would go out and watch the action themselves on those summer nights. To the right of Stanley Dance is Wayne Tempe. He was always easy to spot with that big “W” on the upper arm of his white-black-red driver colors.
Temple racked up 1.164 wins as a driver before going to work for the late Gas City boss Bill McEnery.
Saturday Wayne will be back at Hawthorne to watch his Polar B (pp 6) takes on Louscipher (Pat Curtin), Matt Q (Casey Leonard), Picky Picky Valor (Brian Carpenter), Cassisandfifth (Mike Brink), Lougazi (Jamaica Patton), Dr. Spengler (Curt Grummel), Trixie’s Jethro (Jared Finn) and Flash Forward (Kyle Wilfong).
A Booming Interruption: An unexpected almost hour long fireworks display delayed last night’s Sunday racing at Hawthorne but don’t blame the racetrack for the unwelcomed show.
It was the Town of Cicero that put on the display “to celebrate Mexico Independence Day” according to a Cicero Town Hall representative. That might have made sense if Sunday wasn’t September 18. Mexico Independence Day is September 16.
http://harnessillinois.com/wp-content/uploads/2021/03/ihha_logo_white_wtext_v2-300x130.png 0 0 Mike Paradise http://harnessillinois.com/wp-content/uploads/2021/03/ihha_logo_white_wtext_v2-300x130.png Mike Paradise2016-09-22 12:34:372016-09-22 13:39:09Polar B Pleasant and Unexpected Addition for Owner