Homepage
You are here: Home1 / Mike Paradise2 / Pretty Image, the Mare to Beat

After a one week absence the circuit’s $12,000 Open Pace for fillies and mares returns Sunday evening with eight formable distaffers looking to keep the Rodney Freese mare Pretty Image from a return visit to Hawthorne’s winner’s circle.

The six-year-old got a great trip from driver Casey Leonard two weeks ago and rolled to a 1:54.2 victory despite a three-month layoff. A 3 to 5 favorite on opening weekend, Pretty Image shot out and took command, settled into the two-hole behind the eventual runner-up Dee Rocks (Ridge Warren), and powered past in the lane, the best by one and one-half lengths. 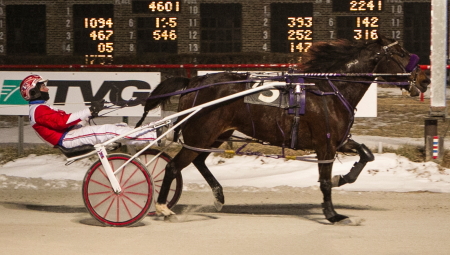 Pretty Image left from the five-slot, tonight she moves outside to the eight in the fifth race feature where posts were drawn by groups. There’s speed inside of tonight’s 3-2 first flash favorite as well as speed on her right with Dee Rocks, a five-year-old mare with 20 lifetime wins who does her best racing on or close to the front.

Leonard drove Pretty Image for the first time in her winning mile two weeks ago and had this to say about the Rodney Freese owned and trained Indiana bred.

“Pretty Image is a nice mare and she’s handy. I thought I’d take a chance with her last week and try to get out of there and things worked out real well for us. She got a helmet trip and finished strong.”

“She hadn’t been out for a while so we were a little concerned she might be a little short but she raced well despite the layoff.”

Rollin Coal was a 1:55.4 front-stepping victor last week for owner and trainer Hosea Williams in a conditioned pace.

New to the Open Pace is Jace Sundeen’s Queens N Tens (pp 1, Brandon Bates). The five-year-old mare carried a 33 race losing streak into the Hawthorne meet but has gone two-for-two here, the last in 1:55.4.

Making their season debut in the Open is Whiskersonkittens (pp 5, Todd Warren) for trainer Kim Roth, and Ideal’s Nicole (pp 6, Mike Oosting), from the barn of conditioner Hector Herrera. 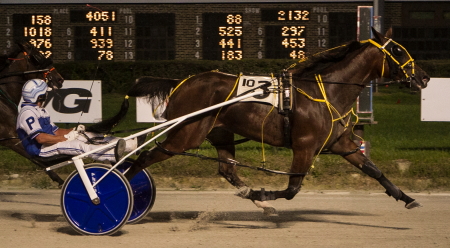 Now seven, Whiskersonkittens is closing in on the $300,000 in career earnings for Anna, Illinois owner Ronald Knupp and owns 30 lifetime victories. In her final start of 2019 the ICF mare was second best in the $50,000 Tony Maurello Memorial Final on Hawthorne’s Night of Champions.

Ideal Nicole split her time last season racing at Hawthorne and Hoosier Park. The five-year-old mare put $43,987 on her 2019 card and took a mark of 1:53 flat in Indiana. Hector Herrera trains the mare for Garcia Power Inc. of Crete, Illinois.

Juan Franco had back-to-back winning drives to the delight of longshot players. In race four he rallied the Rodney Freeze gelding OK Galahad to a $91.20 winning mutuel and one event later pulled off a another surprise with the late rusher Parklane Eagle ($36.00) in the fifth race headliner, overtaking the prohibitive 1-5 favorite in deep stretch.

The longest price winner of the night came in the eighth race when Shabazz, driven by Cordarius Strewart, popped at $95.60.

No Open, No Problem Jerry Costello To Lead Illinois Agriculture
Scroll to top