By Mike Paradise
Illinois based trainer Rob Rittof is enjoying more than the warmth of the weather in Florida these days while spending the winter at Pompano Park. The Joliet, Illinois native’s horses are doing quite well, nevertheless Rob’s center of attention is on the upcoming harness meeting at Hawthorne.

“Everything I’m racing here in Florida is with Hawthorne in mind,” said Rittof whose horses have finished third or better in almost half (18 for 37) of their starts at Pompano.
The Rittof Stables Sunset Dreamer banked over $41,452 last year and all but $960 of that amount came at Hawthorne. The Western Ideal gelding only picked up one check, a third place finish at Hoosier, racing out of Illinois. He won 7 of 24 starts at Hawthorne, including an Open Pace in late January of 2016 and two legs of a Late Closer Series in May. 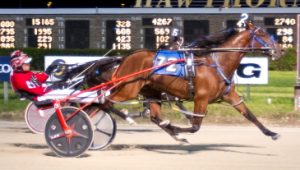 Sunset Dreamer (Kyle Wilfong) will return to Hawthorne where he was a seven-time winner in 2016. (Four Footed Photo)

“Sunset Dreamer likes Hawthorne’s long stretch,” continued Rittof, who resides in Channahon, Illinois, located about 45 miles west of Balmoral Park.  Hawthorne’s turns are a little bit different and Sunset Dreamer seems to get around them real good. He loves to chase horses down. When he starts passing horses his confidence just grows bigger and bigger and he just keeps going.”

Six of Rittof’s eight wins in Florida have come with the small hard-trying filly Alabamashakey who won her first six starts since joining Rob’s stable. The one-time $27,000 yearling purchase was unraced as a 2-year-old and made only a little more than $1,500 when she went winless at three in six tries campaigning at Saratoga (NY).

However she’s been sensational for her Chicago owner Mark De Vience since joining Rittof’s barn, earning over $17,000 this year and taking a mark of 1:53 flat on the five-eighths south Florida track.  Rittof commented, “Alabamashakey is a New York bred so they wanted to give the filly an opportunity to race there. She got sick and had some problems with her feet. All-in-all she just had bad luck. They turned her out last fall and then sent her to Bob Sanders in Spring Garden (Florida) for about a month before I got her and had her down in 20 or 25. We kind of just went right on down the road with her and she didn’t have any hiccups. She did everything the way we wanted and Mike (driver Simon) gets along with her. She’s sound and she’s a filly that likes racing up-close. Every week we kind of shake our heads in surprise on just how well she’s doing.  “She’s a small filly but she doesn’t know that. She thinks she’s the biggest horse in the barn. ”  Mike (driver Simon) gives her a big compliment when he says: ‘She just wants it.’”

Rittof doesn’t think the move to a bigger track will prove to be a determent to Alabamashakey.  “She’s had to cut some fast fractions in some of her wins down there. I think she’ll be able to carry her speed on the bigger track at Hawthorne as long as she doesn’t get hooked-up in an early speed duel.  Everything I’ve got here in Florida is for Illinois owners with the intent of them going back to Hawthorne. We came down here because we didn’t want to spend the winter shipping all over.  We’re stabled in a shed row.  My horses right now are looking outside where its 77 degrees with a nice breeze is blowing in their faces. They can’t have it too much better for this time of the year.  I have a 2-year-old Illinois bred here that I’ll be bringing to Hawthorne. His name is Dandy’s Phoenix. He’s a Sportsmaster colt out of C Suzabelle so that makes him a full brother to Kelly’s Keepsake.”

Earning Her Visit: Deb and Bernie Paul’s solid ICF mare Seeyouatthefinish earlier this week notched her second season victory at The Meadows in western Pennsylvania. The 1:52.4 front-end mile win for the 7-year-old mare came on the front end in a high-end $11,500 conditioned event, increasing her 2017 bankroll to $17,655.