So maybe it’s fitting that we recently had our own Illinois harness racing “three-peater” when Roshun Trigg made it back-to-back-to-back leading trainer championships on the County Fair Circuit.

The Mississippi native was honored on closing day of the Du Quoin meet with a plaque presented to him by the I.H.H.A. 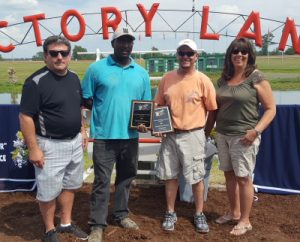 Trigg has been making the long trip up from his home state of Mississippi every summer for many years for the Illinois County Circuit.

One of those “nice horses” is the 3-year-old trotter Louscipher who won both the Springfield and Du Quoin State Fair Championships and earlier captured two legs of Hawthorne’s Erwin F. Dygert stake series, already wrapping up a starting berth in that $78,000 (est.) final on the September 25 Night of Championships.

A Night of Champions victory would make Louscipher and repeat winner on the track’s showcase evening of racing. The talented trotter captured the $75,000 Kadabra last year, a win propelled the home-bred to the 2016 Illinois 2-Year-Old Male Trotter of the Year honors for the Flacco Family Farms, the owners and breeders of the son of Lou’s Legacy out of the Valley Victor broodmare Sh Four.

Louscipher won 7 of 15 starts with 5 seconds and 1 third as a freshman, earning just under $80,000. He’s already matched his 2016 win total as a 3-year-old in 14 starts and has almost $72,000 banked with the fourth leg of the Dygert Series and the championship still on the horizon.

Mike Oosting took over the lines on Louscipher when the gelding’s regular driver Casey Leonard skipped the Du Quoin meet. The trotter’s triumph in the $29,000 Pronto Don came in a career fastest time of 1:55.2.

“Louscipher is good again.” continued Roshun. “He wasn’t at 100 per cent for a couple starts in July when he was a little sick but we took care of that problem and he came to Springfield and Du Quoin in good shape. I was very happy with the way he raced the other day at Du Quoin.

“I was also pleased with my trotting filly Lougazi at Du Quoin.”

Roshun had his best year in 2016 when his stable earned over $300,000. Thus far this season his horses have pulled down $259,959 with three more weeks of racing still left at Hawthorne.