If you’re wondering if last Saturday’s Hawthorne’s earlier-than-normal 6:30 pm first post on Kentucky Derby Day was a success . . . it wasn’t. It was a flop.

The idea that by moving the first race post closer to the finish of the Kentucky Derby has been around for decades and there was a time it worked out fairly well. However, that was when our sport was much more popular and the full-card simulcasting of dozens of other race tracks weren’t available.

But like the typewriter, the rotary phone, a muscle-car that gave you 7 miles on a gallon of gasoline, those things are long gone, and so should the moving around of a racetrack’s first race post.

Last Saturday saw less than $20,000 bet on Hawthorne’s first race. A little more than $22,000 was bet on the second race and both events were solid conditioned races with $6,500 purses.

The third race, a seven-horse field of $6,000 claimers, went off at 7:25 pm had had $41,000 bet on it, about the same amount as races one and two put together. As per the norm the wagering pools continued to rise as the night went on.

The last two races that went off at 10:40 pm and 11 o’clock handled over $75,000 and $90,000, respectively. If Saturday’s first two races were contested after 11 pm instead of the much-too-early 6:30pm first post they would have handled four-plus times more money and the horsemen’s purse account would have been better off.

Since it was the first weekend of the meeting, there was only opening night Friday for Hawthorne to try and “push” Saturday’s early post. Also, racetracks continue to believe that by putting something on their web-site and/or their TV signal, the entire harness racing betting nation will take notice.

With 14 other horse racing simulcasting signals being telecast from all over the country when Hawthorne’s earlier first Saturday race came around, I doubt the switching over to watch the Illinois harness racing product wasn’t a high priority on horse player’s minds.

The Hawthorne Kentucky Derby night handle was a disappointing $659,783, probably the lowest total you’ll see on another Saturday card at the summer meet with 12 races completed.

Sunday’s first race low-end $4,000 conditioned pace (7:15 off-time), saw twice the money wagered on it than on Saturday’s opener. For the night, over $260,000 was bet more on Sunday, despite having one less race on the program, than on Saturday. 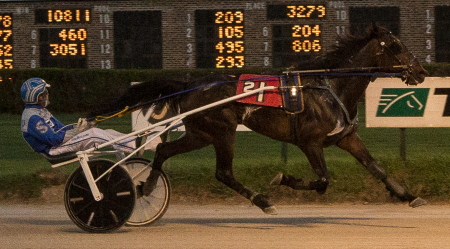 It’s Not Too Late: The initial Thursday night card of Hawthorn’s summer meet kicks off the second week of live racing on the big mile track.

Leg two of eight Late Closer Series, are on tap for the weekend with four on Friday and two each on Saturday and Sunday. The top 10 point earners in each series advance to next weekend’s finals. Points are awarded are a 50-25-12-8-5 basis with a single point given for starting.

Since, there are only two rounds, the first place finishers in last week’s opening legs have wrapped up start berths in the finales. That would be Lous Silver Star (Tyler Shehan), in the Bea Farber trot series, Never Say That (Kyle Wilfong), in the Daryl Busse trot, Fox Valley Catwalk (Tim Curtin), in the Walter Paisley pace, and Ryan’s Mistress (Juan Franco), in the Dave Magee.